The world must know : the history of the Holocaust as told in the United States Holocaust Memorial Museum / Michael Berenbaum ; Arnold Kramer, editor of photographs.

"Opened in April 1993, on the fiftieth anniversary of the Warsaw ghetto uprising, the United States Holocaust Memorial Museum in Washington, D.C., summons all who enter its portals to rise to an important and extraordinary challenge: to remember and immortalize the 6 million Jews and millions of other Nazi victims of World War II - Gypsies, Poles, homosexuals, the handicapped, Jehovah's Witnesses, political and religious dissidents, Soviet prisoners of war - who were murdered in the most horrifying event of our time: the Holocaust. The World Must Know depicts the evolution of the Holocaust comprehensively, as it is presented in the United States Holocaust Memorial Museum - the living memorial to the victims of the Holocaust that tells a story the world must know in the most moving and powerful visual and verbal way." "Drawing on the museum's artifacts and its extensive eyewitness testimony collection, the second largest in the world, and including over 200 photographic images from the museum's collections, The World Must Know details the four major historical participants: the perpetrator, the bystander, the rescuer, and, above all, the victim. The World Must Know journeys back to a time when Jewish culture thrived in Europe, to family Shabbat dinners and joyous Passover celebrations where the lighting of the candles was done before unshuttered windows, and proceeds to that point when the most unspeakable evil in history began, and then bears witness to the most horrifying shattering of innocent lives."

"Starting with the rise of nazism, The World Must Know reveals the human stories of the Holocaust, documenting the range of psychological extremes from the evil of the Nazi doctors who staffed the death camps and determined "who shall live and who shall die," to the nobility of ordinary citizens, like those in the village of Le Chambon-sur-Lignon, France, who risked their own lives by offering their homes as havens to refugee Jews, to the horror of entire families as they received sudden orders to pack up only what they could carry, leave their homes, and report to a train station for "resettlement in the East," a euphemism for deportation to Auschwitz, Treblinka, Sobibor, and other death or concentration camps. The powerful and evocative images in The World Must Know tell the stories of hope and death - the grim reality of the ghettos, the mass murders of the mobile killing units, the concentration camps, and the death camps, as well as the brave and heart-wrenching stories of resistance and rescue, through which we see the human necessity for - and the ultimate power of - personal choice." "More than a catalogue of the museum's exhibit, The World Must Know is a study and exploration of the Holocaust that fulfills the commandment from those who perished, which seared the souls of those who survived: Remember. Do not let the world forget. This is a significant contribution to our understanding of the history of the Holocaust that will not only memorialize the past by educating the generations that follow but also transform the future by sensitizing those who will shape it. That is the challenge to, and the responsibility of, all survivors everywhere."--Jacket. 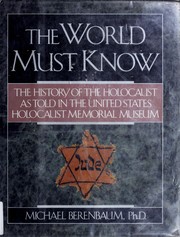 This item may be available through Internet Archive.

Introduction -- The Nazi assault -- The Holocaust -- The last chapter -- Afterword.