00:09:50 Concentration camp inmates and POWs coming down several flights of wooden walkway next to high wall, CU of same, some appear to have patches of some sort on their jackets. MS of men walking through construction area next to railroad track. 00:10:40 Roll call of camp inmates. Soviet and Polish POWs eating in construction area, others walking, sitting, and large group clustered eating next to barracks. One funnels food into cup then puts it under spigot. 00:12:48 VS construction site and men working around high walls, small train and ore cars goes by. LS of earlier wooden stairway, work party lifting large metal forms with pulley, men working high up on top of wall. 00:17:55 Work gang moving rails, men on railcars as they move along track. Camp inmates working on scaffolding high up wall. Men working with long metal rods around shack, scaffolding frame next to wall. 00:20:47 Soviet POWs carry girder, Werkschutz guard with them. 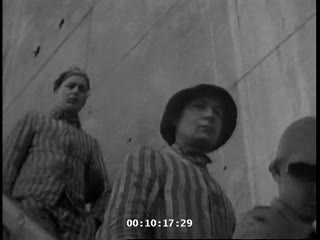 Credit
Accessed at US Holocaust Memorial Museum, courtesy of Hildegard and Sabine Steig

Legal Status
Permanent Collection
Film Provenance
The United States Holocaust Memorial Museum purchased this from the Bundesarchiv in Berlin, Germany in October 1992. The footage was transferred at Bibo TV in Germany and obtained as research for the Museum's Permanent Exhibition.
Note
See Encyclopedia of Camps and Ghettos, V.1, pp 1091 - 1094, especially Bremen-Farge article, for details about the concentration camp, prisoners, numbers, conditions, and mortality rate. Marineoberbaurat Edo Meiners was in charge of the site. The Bremen-Vulkan Shipyard, part of the Thyssen Group, had control of Project Valentin. About 10,000 workers, the majority forced laborers, were employed on the site. The majority of prisoners were French; also strongly represented were Poles, Soviets, and Greeks. From the summer of 1944, a Marine Reserve Detachment of c.250 men took over guarding the prisoners. On the construction site, prisoners were supervised by German foremen. Evacuation of the Farge subcamp began on April 10, 1945.
Copied From
16mm pos
Film Source
Bundesarchiv (Germany). Filmarchiv
File Number
Legacy Database File: 0382
Source Archive Number: 3729 R6