Excerpts of well-known propaganda film made by the Nazis to show the International Red Cross and others that they were not mistreating Jews in the "ghettos." Documentary footage depicts the life of Jews in the ghetto of Theresienstadt [Terezin] in Czechoslovakia as harmonious and joyful. They wear yellow stars on their civilian clothing but are euphemistically called residents ["Bewohner"] instead of inmates. They look well-dressed and well-fed and keep smiling. No SS guards or other armed Germans are shown. 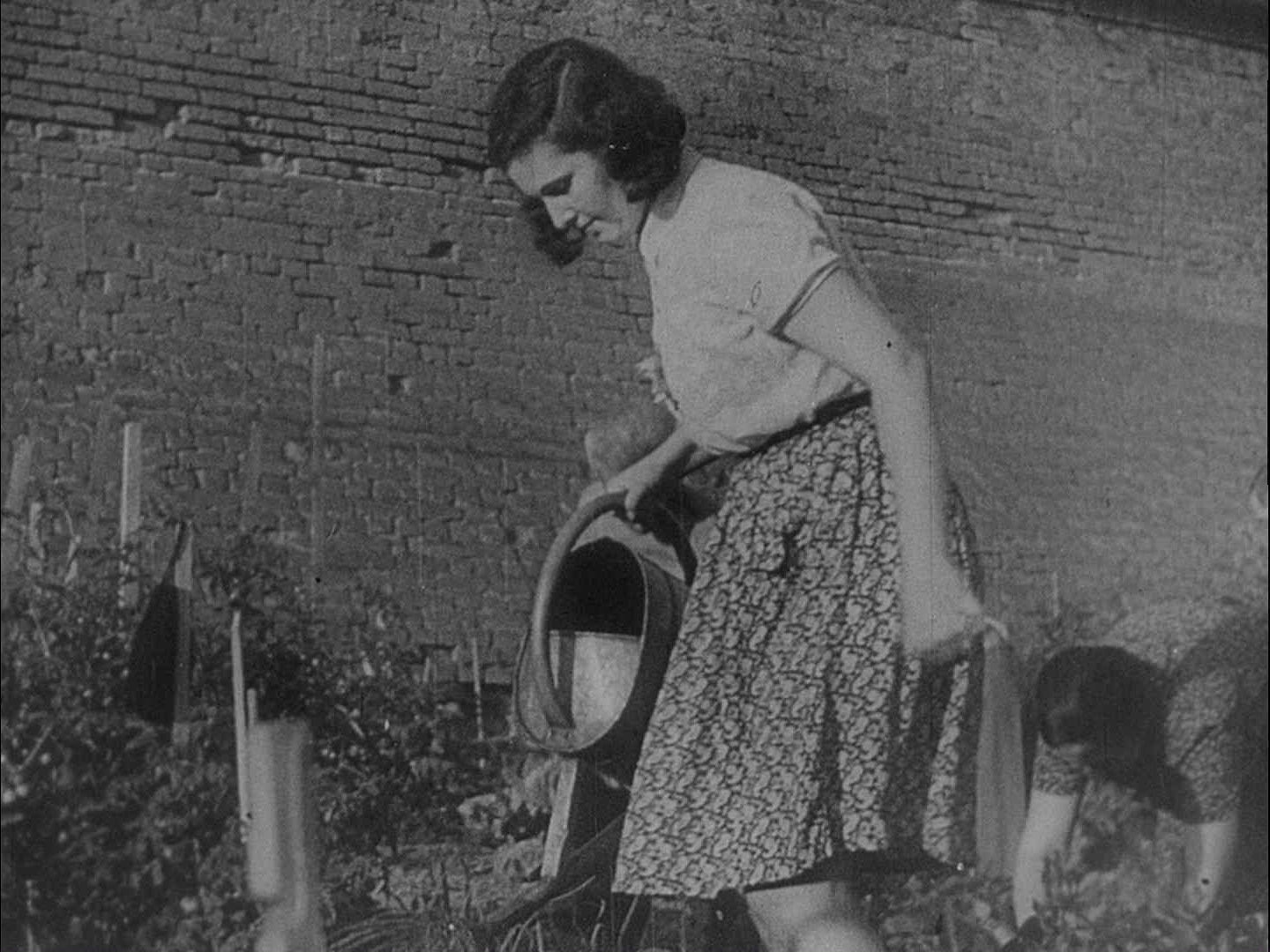 See Film and Video Archive files for articles and background on the 1942 and 1944 filming.

The full title of this film is: Theresienstadt: ein Dokumentarfilm aus dem Juedischen Siedlungsgebiet [Theresienstadt: a documentary film about the Jewish settlement]. The often-used title for this film is: Der Fuehrer schenkt den Juden eine Stadt [The Fuehrer gives the Jews a City].

Theresienstadt, established in November 1941, was the central ghetto for Jews from the Protectorate of Bohemia and Moravia. From July 1942 on, the ghetto also contained Jews decorated with German army medals as well as 'prominent' Jews and older Jews from several western European countries. It functioned as a transfer camp for deportations to the death camps in Poland and the occupied Soviet Union. After repeated requests by officials of the International Red Cross from October 1943 on, the SS agreed to allow a visit on June 23, 1944. Comprehensive 'beautification' measures took place in preparation for the visit in order to camouflage the ongoing mass murder of European Jewry to the world. Theresienstadt was presented as a 'model Jewish settlement.' Hans Guenther, the head of the regional SS-Zentralamt zur Regelung der Judenfrage [Central Office for the Regulation of the Jewish Question] in Prague, developed the idea to produce a movie depicting the 'excellent' living conditions for Jews in Theresienstadt (most probably in December 1943). The scenes in the film show camp life and feature the inmates in their day-to-day lives. Living conditions in Theresienstadt (and especially the efforts in education and culture organized by the Jewish council) were better on average than those in the Polish and Soviet ghettos. However, the movie crassly exaggerated the quality of life and omitted the harsh reality of overcrowding, hunger, diseases, and death that defined life in Theresienstadt.

Beside the cinematography, inmates of the ghetto were used in all functions (including the director Kurt Gerron) to produce the film under close supervision by the SS. Immediately after the end of shooting in September 1944, Gerron and other cast members were deported to Auschwitz where they perished. After the final cut on March 28, 1945 the Czech company Aktualita received RM 35,000 from Guenther's office for the production of the movie. The movie was intended to be screened to international audiences like the International Red Cross and the Vatican. Following the first screening in early April 1945 to high-ranking government and SS officials in Prague there were at least three more screenings to international humanitarian emissaries in Theresienstadt itself on April 6 and 16, 1945. Plans for a further distribution to broader audiences in the neutral states never materialized because of the progression of war.

Since 1945 no complete copy of the entire ninety minute film has been located. There are only fragments available at different archives. The infamous title "Der Fuehrer schenkt den Juden eine Stadt" ["The Fuehrer Donates a City to the Jews"] is not original - it was given by survivors of Theresienstadt in the aftermath.

Copyright
Chronos-Media GmbH
Conditions on Use
Contact Chronos-Media at info@chronos-media.de for permission to reproduce and use this footage.
Record last modified: 2021-06-03 12:40:04
This page: https://collections.ushmm.org/search/catalog/irn1000385