Elaborate funeral: Body lying in state, many plantings and flowers, guards. Taking up the width of the street, the funeral procession includes Jewish police, rabbis in robes, horse-drawn hearse, mourners with banners. At cemetery, lowering casket, service, shots of mourners (three rabbis chanting, one woman completely draped in black). Microphone can be seen on left side, briefly, held above the mourners and grave markers, 01:59:24. Synagogue service: Worshippers pray. Torah is removed from the ark, men kiss it, then read from it. Shochet: In kosher style, kills chicken while woman watches (very dark interior). Jewish men at prayer: Man kisses and lays on tallit, winds on phylacteries, then davens (prays). VAR shots of orthodox men at prayer: Standing, draped in tallit, bowing (some CU). In prayer-study, group of younger orthodox men and boys (with earlocks, beards) pray across long table. 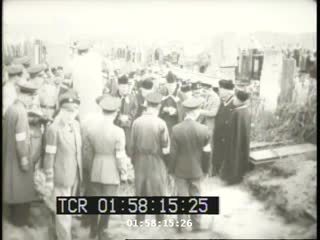 Burn-in time codes appears on Betacam SP version (Protection copy) as well as the VHS. NCJF can make their one-inch version available on a loan basis.
German Wochenbericht of 19 May 1942 mentions the death of two prominent cultural figures in the Warsaw Ghetto. Menchaem Kipnis, writer and singer; and Herman Czerwinski, member of the Judenrat and arts correspondent for Gazeta Zydowska. The report indicates that everyone from the cultural world of the Warsaw Ghetto attended the funeral for Kipnis.
Copied From
1"; 35mm DN
Film Source
National Center for Jewish Film
File Number
Legacy Database File: 781
Source Archive Number: Warsaw Ghetto R6

Copyright
Copyright. National Center for Jewish Film
Conditions on Use
Contact NCJF at pontius@brandeis.edu for permission to reproduce and use this film.
Record last modified: 2020-08-04 09:20:48
This page: https://collections.ushmm.org/search/catalog/irn1000393