High overhead shot of busy street scene, with tilt-up to get very long view of the street. Ground-level shot of Jewish policeman (watching camera) letting horse-drawn carriages pass through gate on a city street. Line of bicycle-rickshaws moving alongside a wall, carrying well-dressed men, a family. Some men remove hats as they pass by. 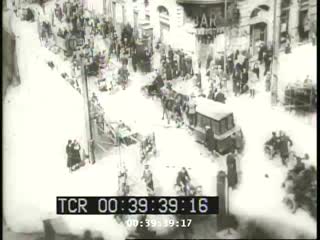