Jewish-mortality chart. Shots of people walking by corpse on the sidewalk; some are running. Coffin wagon in street stops, men carry out plain coffin and drag body into it. Group of men carries and then loads coffin into wagon and walk it away. Two emaciated corpses laid out on sidewalk, people pass by. Men bring cart to bodies and begin to load them. 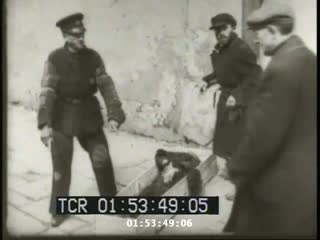 Copyright
Copyright. National Center for Jewish Film
Conditions on Use
Contact NCJF at pontius@brandeis.edu for permission to reproduce and use this film.
Record last modified: 2020-08-04 09:19:48
This page: https://collections.ushmm.org/search/catalog/irn1000401