Views/scenes of concentration camps Ohrdruf, Hadamar, Nordhausen, and Buchenwald. Exhumation of bodies, German civilians taken on tour of camp; survivors and soldiers; stacks of bodies. Shots of US war prisoners at a camp. 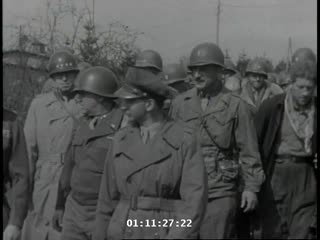