Lots of LS of stage production, chorus, Torahs being carried out and held by rabbis. Some MS of actors (both in the production and reading prepared speeches). American flag. Crowd shots, banner with Star of David. Edward G. Robinson reading a statement: These are the two million Jewish dead of Europe today. They will have no one to ...day of judgment. No one ... "Remember us."
Of the 7 million Jews in German held lands, the Germans have said none will remain... When the time comes to make the peace, they will have been done to death.

Fragment of Hebrew prayer. Orthodox Jewish men (or actors dressed as?)
Voice heard over scenes on stage: "the names of Jews who've given value to life." (Fragmented)
Anatole France, the free Jewish heroes of Palestine... American dramatist and author of the song "Home Sweet Home'...
Music: "Over there" with flags held on stage. 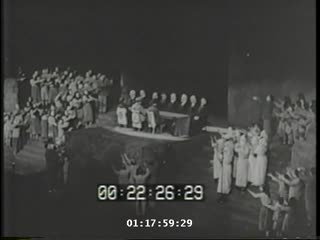