(LIB 7016) Orphans of Buchenwald, Buchenwald, Germany, June 19, 1945. LS, large crowd at Buchenwald outdoors on hillside. UNRRA official (woman) handing out papers. 03:23:16 01:46:51 Lilly Engelman (from Hungary and previously at Auschwitz) with the bandage on her face, prepares to board the train to Switzerland. Her sisters, Renee and Piri, appear later in this footage. Children at Buchenwald concentration camp are divided into small groups by UNRRA personnel. MS, American military truck taking the orphans to railroad cars. CUs, climbing off truck with belongings/luggage. US soldiers present. LS, walking towards railroad cars marked "Allied Forces." MS, boys climbing aboard, helping each other. CU, two girls standing inside doorway. 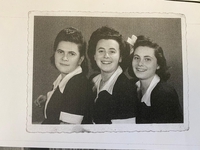 Learn more about Lilly Ebert (nee Engelman) at https://newscolony.com/auschwitz-survivor-96-watches-footage-of-herself-in-1945/ or watch her testimony https://collections.ushmm.org/search/catalog/vha16210. It's likely that Lily's late sister Renee appears in the opening shot of the film (the girl on the left who turns her back to the camera).
Copied From
1" VM (I)
Film Source
United States. National Archives and Records Administration. Motion Picture Reference
File Number
Legacy Database File: 1368
Source Archive Number: 111 ADC 4812
Featured In
Return to Life - 2.10: Permanent Exhibition - The Holocaust - Audiovisual Monitors. Open. Open