Majdanek camp after liberation, crematoriums. Polish Red Army with prisoners. The 1944 trial of six Nazi war criminals in charge of Majdanek camp outside Lublin. The trial takes place in Lublin. Charges are read in Polish, with views of defendants as they are named. Defendants speak in German (Polish subtitles). Concentration camp inmates (witnesses) sworn in. Man gives testimony, Jewish woman gives testimony. CUs of accused. Lawyer for the prosecution delivers his remarks. Sentencing to death. Public execution (by hanging) of five Nazis. Men swinging from the gallows' ropes, with a crowd of onlookers. 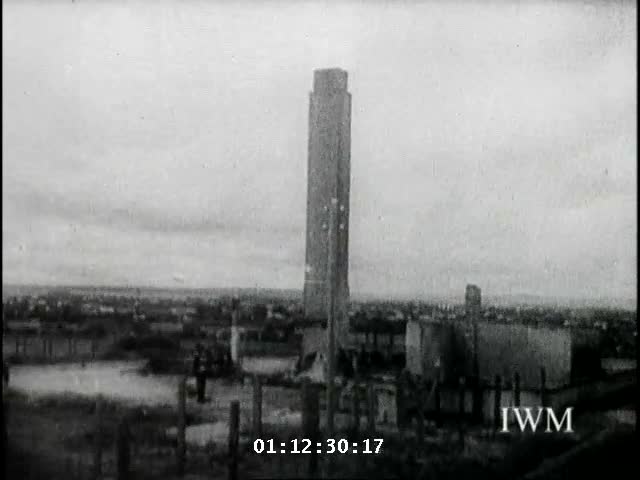 Legal Status
Permanent Collection
Film Provenance
The United States Holocaust Memorial Museum purchased this footage from the Imperial War Museum in London in 1999.
Note
The WFDiF version has no Polish subtitles, but USHMM does not have a copy. For more information on the Majdanek trials, go to https://en.wikipedia.org/wiki/Majdanek_trials.
Swastyka I Szubienica (Swastika and Gallows) was produced by the Film Studio of the Polish Army and was shot by the Forbert brothers and Stanislaw Wohl, directed by Kazimierz Czynski and edited by Wlaclaw Kazmierczak. The film covers public aspects of the trial in Lublin of the former German camp guards rounded up around the city. Beginning on November 30, 1944, the trial lasted three days and the sentences were given on December 2nd. Wishing to sway public opinion, the filmmakers provided extended excerpts of testimony by various witnesses as well as statements by the accused, the chief judge and the prosecuting attorney, all with the intent of portraying Communist justice as being fair and swift. As the bodies of the five German guards are seen swinging in the wind in the final scene, a voice-over announces: “this is not an act of revenge, but a simple act of justice.”
Copied From
35mm; b/w
Film Source
Imperial War Museums
File Number
Legacy Database File: 1673
Source Archive Number: SIK 1047 R1