Russian film produced by the Central Studio of Documentary Films in Moscow about the War Crimes Trial (IMT) in Nuremberg.

Reel 6 (20:54) begins with a series of MCUs depicting prosecutors writing concluding statements. LS of judges. MCUs of American, British, French prosecutors giving statements. MCU Soviet Prosecutor Rudenko delivering his summation at length (original sound) intercut with courtroom scenes. Court adjourning. Numbers of months, documents, etc. mentioned over empty courtroom. MS of guard standing beside door reading: Judges Room/In Session. CU judges filing past lens into court with verdict. MCU Lord Justice Lawrence reading allowed. Series of quick CUs of individuals as they are sentenced to death by hanging: Goering, Ribbentrop, Keitel, Rosenberg, Kaltenbrunner, Jodl, Frank, Frick, Sauckel, Streicher, Seyss-Inquart. CUs of those given life sentence: Hess, Funk, Raeder. CUs of those sentenced to twenty years: Schirach, Speer. CU of Neurath, sentenced to fifteen years. CU of Doenitz, sentenced to ten years. CUs of those acquitted: Schacht, Von Papen. LS of Nikitchenko speaking. The sentenced being escorted from courtroom. LS from above of Nuremberg prison cells and yard intercut with ECU of Execution Act document. (26:07) Series of MCUs of corpses of those sentenced to death, bodies one by one, with noose next to each one. Coverage shots of prison. TSs of war-ravaged Soviet landscapes cut to growing wheat fields and LS of children in meadow. CUs of children's faces. (27:20) CU of drum roll cut to CU of swastika being drawn on door with chalk. Montage of postwar Germany, including Adenauer and Erhardt, decorated German soldiers, moving troops of veterans, intercut with shot of swastika painted on wall. CU of Strauss speaking at podium during political rally. CUs American missiles being moved. TS of burning villages. Footage of Hans Speidel exiting government building and saluting. Shots of Adolf Heusinger at Pentagon. Still of Helmut Oberlander. Tracking shot from concentration camp footage: line of prisoners behind wire. Various close shots of monument to the dead intercut with footage of camps and a pile of corpses. ECU statue's hand. CUs women speaking before crowds of Soviets. Large political rally for German Democratic Republic. MCU tracking shot across row of generic faces. 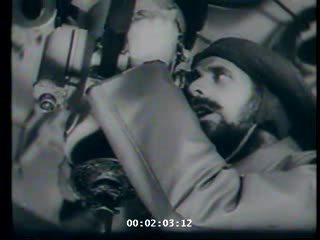 Legal Status
Permanent Collection
Film Provenance
This film was donated by Sovexportfilm via the Embassy of the USSR on October 8, 1981. Two film reels: "Byla na zemle derevnia Krasuha" were stored at MARS (a division of the National Park Service) prior to the opening of the United States Holocaust Memorial Museum under MARS accession numbers 145x-8 and 145x-9; six film reels: "Sud Narodov" were stored under MARS accession numbers 145x-5, 145x-11, 145x-3, 145x-7, 145x-10, 145x-4. The films were transferred to the Steven Spielberg Film and Video Archive when the Museum's Collections Division and its departments were established in the 1990s.
Note
See Film ID 214 for the first half of this film.
There are no burn-in time codes on the VHS user copy.
Film Source
Sovexportfilm
File Number
Legacy Database File: 2266