This two reel "agitka" (short propaganda film) was one of the first produced by the Soviet regime. Made in 1919 to show to Red Army troops, often on trains, the film tells the tale of a Jew who survives a pogrom and becomes a leader in the Red Army. 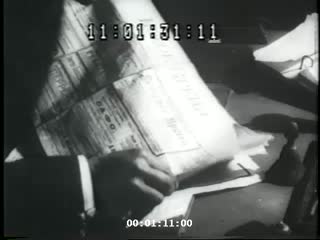 Contributor
Director: A. Razumny
Producer: I. Ermolyev by order of the Moscow Cinema Committee

Copyright
Copyright. National Center for Jewish Film
Conditions on Use
Contact NCJF at pontius@brandeis.edu for permission to reproduce and use this film.
Record last modified: 2020-02-04 10:39:37
This page: https://collections.ushmm.org/search/catalog/irn1002015