Documents on the Sepahardim collected by Ernesto Gimenez Caballero.

The following notes come from intertitles from the film, restored by NCJF in 1994: The Jews lived in Spain, more or less tolerated, from the time before Christ until March 31, 1492, the date of the national consolidation of Spain. And in this land of "Galud" (Exile), they produced a rich culture for centuries. For this reason Spain, apart from Zion, is the Sephardi's most sentimental homeland. The ancestral home of their most respected ancestors whose descendants are the aristocratic Sephardim--The Jews of the Spanish Homeland. (Drawings are used to depict these Jews) Expelled Jews being dispersed to the European continent, North Africa, and later to America. (Drawings are used to depict the beginnings of this diaspora) But the vast majority were directed to Oriental lands, the Ottoman Empire, that now make up the Balkan Peninsula. (More drawings are used to depict this eastward migration) The remains of Judaism in Spain are archaeological in nature (synagogues, neighborhoods, manuscripts) Thus in Toledo, birthplace of Jehudah Halevy, where the old neighborhoods "Alcana and Castilla" once stood, are seen the magnificent Synagogues of the Passage and the Church of the Virgin Mary. (EXT and INT views of these buildings) And the streets of Santo Tome de Los Bodegones, La Sal de Las Bulas Viejas, Angel de La Sinagoga, the Cadena's house. (EXT views of the neighborhood, people in the streets, etc.) Some Toledan villages, such as Yepes, are considered to be of purely Jewish origin. (EXT views of village, streets, people walking on streets, etc, mostly LSs) Cordoba, birthplace of the Great Maimonides, indelible traces of him can be observed. However, modern Jewish communities do exist in Spain like this one of the "turroneros", Moroccan almond-paste makers in Seville. (EXT shots of men and women sorting almonds, stirring cauldrons of almonds, children pose in front of a table) Or like those of Madrid and Barcelona, the small Oratory of the Catalan Jewish community. (EXT, various shots of families posing in their courtyards) You can see here the authentic Sephardic features of the young and prominent writer Samuel Ros from Madrid. (EXT, MCU of Ros, in profile and then looking directly at the camera). Among the Spaniards that dedicate their attention to the Sephardic problem is the illustrious student of the Romance, Mr. Ramon Menendez Pidal. (EXT, MCU, Pidal seated at a table, talking to the camera) The great politician of the Sephardic cause, Mr. Fernando de Los Rios. (INT, MCU, de Los Rios seated on a divan, talking to someone off camera, occasionally glances at camera) The diplomats Mr. Saavedra and Mr. Agramonte. (INT, MCU, two separate shots, one man seated in large leather club chair, one at his desk, both speak intermittently to camera) Secretary of the Board of Cultural Relations, Mr. Luzuriaga. (EXT, CU, smoking and speaking to camera) The chronicler of the Jews in Marruecos, Mr. Manuel L. Ortega. (EXT, MCU, Ortega standing, with hands in pockets looking screen right and occasionally at the camera. CU, Ortega holding a copy of a book and smiling) And above all, the venerable Mr. Angel Pulido, Emissary of the "Spaniards Without a Homeland". (EXT, CU, slightly out of focus, Pulido glances at a piece of paper and then speaks to the camera) Pulido began his campaign on the Danube at the beginning of the century upon meeting "Spaniards" that later on we would film. (EXT, shots of boats and people along the Danube) Some rabbis of the Balkan communities: Bejarano de Constantinople, Chaves de Atenas, Alcalai de Belgrado, Levy de Sarajevo, (after each intertitle which identifies the rabbis, there is a CU of each man) Elderly women who preserve the centenary tradition of the treasured Spanish language which they have transmitted to their children (VS, of elderly women speaking to the camera, posing for the camera) Cemeteries of Bucharest, Salonika and Sarajevo. (VS of tombstones, and larger stone structures in the cemeteries) Synagogues of Rumania and Yugoslavia. (VS of these buildings, INT, EXT, as well as men praying and men walking around the courtyards of these synagogues; INT of a service in session; EXT men walking past a synagogue; CU of the EXT of synagogue) A ceremony: The "Sohel" or ritual slaughterer. Liturgical sacrifice of a hen. (EXT, an older man slits the throat of the hen) Schools and institutions of Salonika, Rutschuk and Sofia. (VS, EXT and INT, women at a sanatorium/home, children in a classroom, children being led in recitations/singing by their teacher- in an open courtyard) Streets and houses of the Jewish quarters. Asekui, the oldest neighborhood of the first immigrants in Istanbul. (EXT, scenes of the markets, locals on the streets, the shipyards, people posing in the windows of their homes, VS of Moroccan Jews, etc.) Among the Balkan Sephardim, there are personalities of great valor: The philologist Kalmi Baruch, a Yugoslavian subject. Politicians, lawyers and bankers such as Mr. Mayo, Mr. Cayon, Mr. Nehama and Mr. Mussafia. Dr. Saul Mezan, a Bulgarian subject. The Spanish vice consul in Salonika, Mr. Ezraty. The founder of the Revista Hispanica in Bucharest, Mr. Helfant, with the diplomatic representatives Cardens Soriano. After our visit Spain initiated a spiritual revival around the Sephardim, regarding them as contributors to the traditional Spanish culture. Our motto must be, once again, that of the noble envoy Joseph Moreno, sent to Turkey during the eighteenth century, "Spaniards, return to where you once lived!" 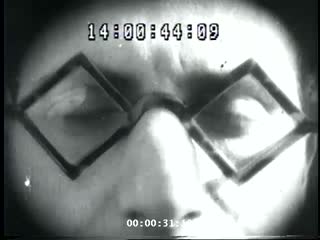 Copyright
Copyright. National Center for Jewish Film
Conditions on Use
Contact NCJF at pontius@brandeis.edu for permission to reproduce and use this film.
Record last modified: 2020-02-04 10:39:38
This page: https://collections.ushmm.org/search/catalog/irn1002018