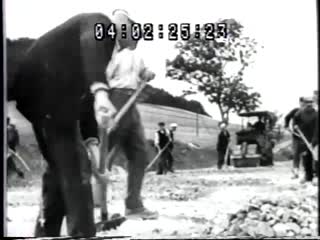 Legal Status
Permanent Collection
Film Provenance
The United States Holocaust Memorial Museum purchased this video collection from the National Center for Jewish Film for general reference in July 2000.
Note
This segment consists of a series of poorly edited shots. It is not certain that all shots are originally from the same film or that they were originally constructed in this order.
Copied From
35mm
Film Source
National Center for Jewish Film
File Number
Legacy Database File: 2642
Source Archive Number: Pol 2S 103

Copyright
Copyright. National Center for Jewish Film
Conditions on Use
Contact NCJF at pontius@brandeis.edu for permission to reproduce and use this film.
Record last modified: 2020-02-04 10:39:38
This page: https://collections.ushmm.org/search/catalog/irn1002021