The following notes are from NCJF documentation: MCU, overhead shot, woman rubbing shoulder of a man who is lying face down on the ground. Pan of hills, pan to bodies in a pit. MCU corpse. Pan across many bodies, side by side, people walking past sign at barracks: "HALT! SEIS MUIDULASEN!" (also in Cyrillic characters). VS, barracks filled with bodies, EXT, bodies stacked like lumber, intermingled with lumber, bodies in various states of decomposition, Russian soldiers walking through areas. EXT, MS, crowd, low angle, men on platform, one is speaking, many flags (not identified) in the crowd, crowd enters a building. CU, faces. People throwing articles out of a church. VS, steeple of church, removal of steeple as crowd looks on, cross is torn down, bell is removed, men climb down from tower having placed a flag where the cross originally stood. VS, crowd, crowd with an effigy of a Russian Orthodox priest, also an effigy caricature of a Jew, they are spanking the Jew. VS, removing religious articles/icons from a church, tearing down another steeple, loading bricks from toppled tower. LS, building, pan down to door of building, writing over doorway in Hebrew and Cyrillic. Jump cut back to mass graves, men overlooking graves. VS, man taking Star of David off of a synagogue's steeple. Men open ark, remove Torah scrolls, unscroll Torah for camera. INT, VS of synagogue, workers painting a sign in Russian above an archway. Men on steeple, waving, hanging flag in place of Star of David.

*Throughout the clip there are intertitles in Russian providing locations and events. [not translated] 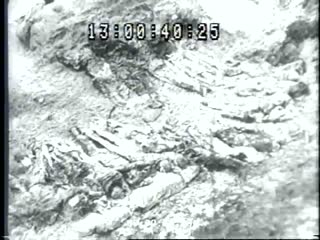 Copyright
Copyright. National Center for Jewish Film
Conditions on Use
Contact NCJF at pontius@brandeis.edu for permission to reproduce and use this film.
Record last modified: 2020-08-04 09:20:49
This page: https://collections.ushmm.org/search/catalog/irn1002023