Deportation of Jews from Thrace

The deportation of the Jewish communities of Kavala, Seres, and Drama from Thrace, an area under Bulgarian military administration (now Northern Greece), carried out by the Bulgarians in spring 1943. Nearly seven minutes of film footage recorded by cameramen from Bulgarska delo document this deportation consisting of approximately 3,000 Jews. It was not possible to shoot without some official permission, for example at the request of the Bulgarian commissar of Jewish Affairs, but no records about it have been found. The film material was not used in a newsreel, nor in any film at the time. It remained in cans and was discovered after the war. Much of this heavily-edited film sequence includes re-ordered scenes introduced as evidence for the 1968 trial of Nazi Adolf Beckerle in Frankfurt.

March 15-17, 1943 (probably) Crowds of Jews pass the tobacco warehouse in Dupnica with their belongings. They were temporarily detained in this tobacco warehouse after being rounded up in the night of March 3 from homes across Greece. Close shots of the Jews walking past the camera, and from behind. CUs as a young family and elders board a truck (this is likely the last group to leave the warehouse; the others depart on foot). Baby carriage. Guards (on right) supervise the Jews. The truck with plate no. 319 drives away. 01:00:42 Local guards, including police detectives, army soldiers, and bureaucrats watch the truck and look back toward the camera. The truck arrives at the train station in Dupnica. The Jews are loaded onto the trains. 01:00:54 Brief shot of Alexander Belev, the Bulgarian commissar of Jewish Affairs, in a hat overseeing the deportation and commanding his guard to close the train doors. EXT, MCU victims behind the barred windows on the Bulgarian train. Moving shot of train with door marked no. “19”. The train departs from the Dupnica station. INTs, crowded railcar, the deported Jews sit on floor, talking. Train moves north from town, filmed from bridge in Dupnica.

01:01:17 The train arrives at Lom train station, probably on March 20, 1943. Soldiers guard the train as the deportees get off and their luggage is unloaded simultaneously. 01:01:33 Brief shot of Pantev (from behind), Lom’s commissar of Jewish Affairs, overseeing the removal of Jews from this train. 01:01:36 In Dupnica (March 15-17, 1943), the deported Jews march through the streets with all their belongings as local spectators on sidewalk watch.

01:01:49 In the Danube port city of Lom around March 20, 1943, the deported Jews show papers and board a passenger ship with their luggage. 01:02:06 Commissar Pantev with a German officer and the boat captain (hat with medallion), checking papers. VAR views of the deportees boarding the boat with their belongings. Local ship workers cover the luggage with a cloth tarp. Quick MS, SATURNUS sign on ship.

01:02:48 Crowds of Jews forced to the village square at Gorna Džumaja (Blagoevgrad), probably on March 5-6, 1943. Different views, tobacco warehouse, houses in BG. MCU teenagers, women and men with Jewish stars attached to their coats, laughing. MCU group of men, talking to each other. More young people, smiling and waving at the camera. Guards with rifles observe a group of Jewish men fighting for scarce food in Gorna Džumaja. More shots of the deportees gathered in the square with their belongings. Pan, housing around the main square. Women hang laundry on a line, guard in BG. 01:04:06 CU, woman with kerchief (note how the camera crew removes the laundry from the fence-post, possibly for a better-framed shot). Different views of the rounded-up Jews with their belongings and housing in the village of Gorna Džumaja.

01:04:31 Note: This two-minute edited sequence contains a series of quick, mixed cuts of the deportation showing different people, places, and dates. Refer to Film Archive for properly sequenced footage. 01:04:31 In Dupnica, a small group is loaded onto a truck. Brief shot in the village of Gorna Džumaja. Back to Dupnica train station as the truck unloads Jews for the train. Quick shots of Jews gathering in Gorna Džumaja. 01:04:44 Jews walk in town of Dupnica beside the tobacco warehouse. CUs, people carrying their belongings. A family poses for the camera. Crowd in line stopped in the street of Dupnica. Train platform at the Dupnica station. Guards. Various views of the Dupnica station from different points. 01:05:25 People get off the train in Lom, senior official Pantev supervises them with other guards. Back at Dupnica station, MCU of the Jewish “passengers” on the train, some smiling. 01:05:42 View from moving train as it departs from Dupnica, and travels north under a bridge. 01:05:58 The steamship in Lom on the Danube River. 01:06:04 Side view of Pantev in dark hat and trench coat. LS, people board the ship with their heavy luggage. Brief MCU pile of luggage. 01:06:36 End. 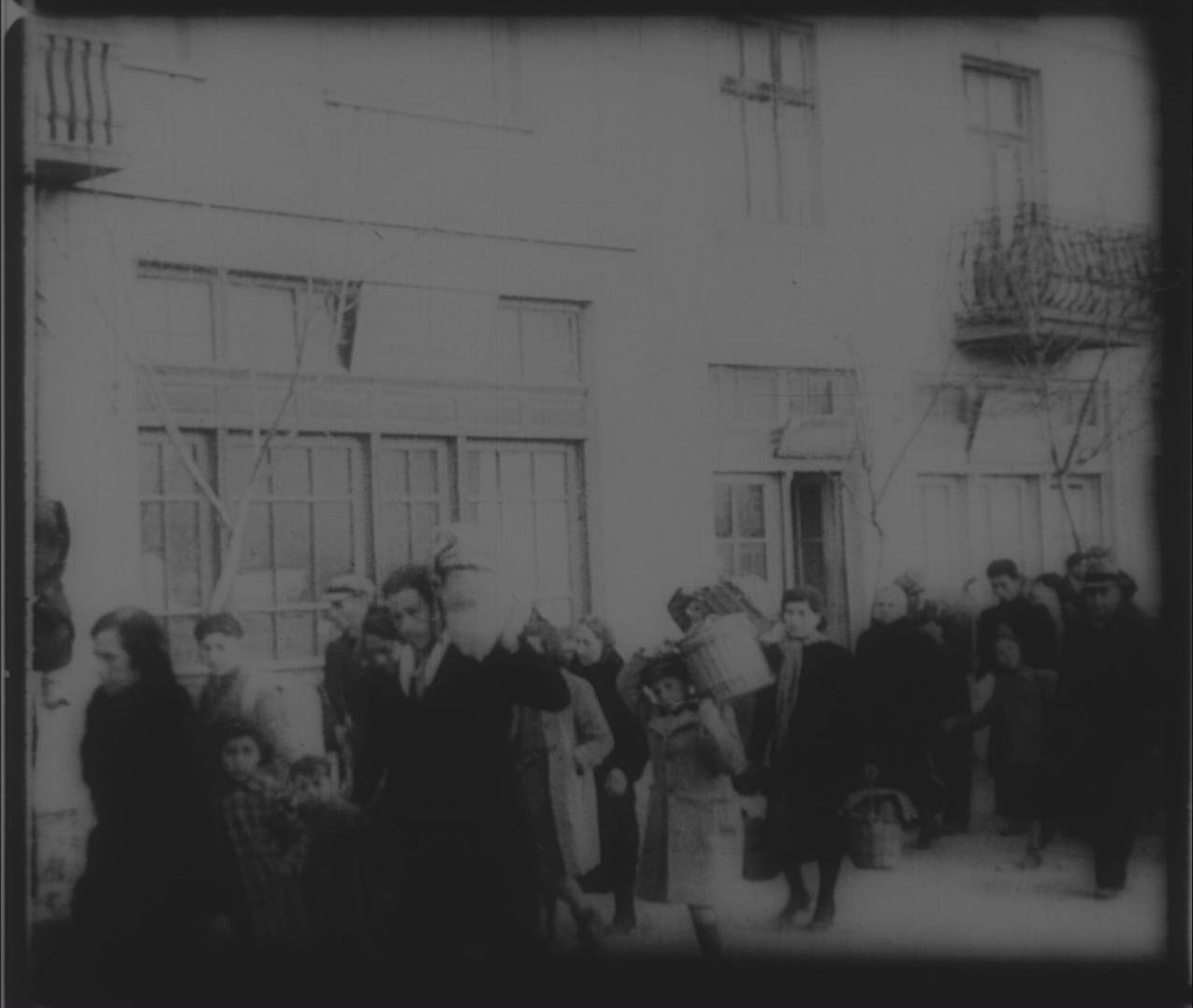 Biography
During WW2, Bulgarsko delo was the state-controlled film foundation established by order of German representatives in Bulgaria.

Legal Status
Permanent Collection
Film Provenance
The United States Holocaust Memorial Museum purchased a 35mm film copy of this footage from the Bulgarian National Film Archive in Sofia, Bulgaria via Concordia Productions in February 1992.
Note
Refer to Raul Hilberg, "The Destruction of the European Jews," vol. 2, pp. 754: (Under German pressure) ...."The Bulgarian Interior Minister now declared himself willing to deport 14,000 Jews from Macedonia and Thrace....On Feb. 22, 1943, Hauptsturmfuehrer Dannecker could therefore conclude with Commissar Belev a written agreement that provided for the deportation of 8,000 Jews from Macedonia, 6,000 from Thrace, and 6,000 from Old Bulgaria -- a total of 20,000." The agreement was signed by Theodore Danneker and by the Bulgarian Commissioner for the Jewish Affairs Alexander Belev.

See also Story 4349 on Film ID 2778 for a Bulgarian documentary that incorporates this deportation footage.

A copy of the entire footage was sent to Germany for the Beckerle trial with some shots added: an opening explanatory text in German; a voiceover in the postwar communist propaganda style with postwar names of the towns; a shot of the signed agreement for the deportation; and parts of some newsreels of Bulgarska delo at the end. This is titled "Deportirane na evrei" and was offered by the Chief Prosecutor's Office of Bulgaria.

On March 4, 1943, 3000 people were driven by trucks to the railway station in Drama and without food and water put on trains and taken to Gorna Djumaya and Dupnica where they lived in temporary detention centers (tobacco warehouses) until March 18, 1943. They were then taken by train to Lom on the Danube river, where they were loaded onto four ships on March 21, 1943 for Vienna. Most of them were eventually delivered to Treblinka.

According to a report of Bulgarian official Kalitsin, 1256 people were sent from Belomorie on the boat "Saturnus" on March 21, 1943.

According to reports of Beckerle, the German Ambassador in Sofia, the remaining 7,000 Jews from Thrace and Macedonia were transported to the Nazi death camps by other means. In 1968, Beckerle was accused of the abduction and murder of 11,343 newly-Bulgarian Jews; however, he was found unfit to stand trial due to illness, and died in 1976.
Film Source
Bulgarian National Film Archive
File Number
Legacy Database File: 2813
Featured In
Permanent Exhibition - The Holocaust - Audiovisual Monitors: Deportations - 3.21
Holocaust Encyclopedia - Historical Film Footage: Deportation of Jews from Bulgarian-occupied Macedonia - Featured Use