This is a short FICTION film. Soundtrack is music and 'wild sound'- no narration, no dialogue. The film begins with one of Hitler’s anti-Jewish speeches and is followed by a German military march. An ambulance with a Red Cross sign enters a gate leading to what looks like a school-yard surrounded by barbed wire. As a group of children play in the yard, an SS man fills the gas tank and connects an exhaust pipe to the “ambulance.” In the next scene the children climb into the truck along with their guardian, while a point-of-view shot from inside the ambulance focuses on a group of birds outside. A German shepherd attempts to return a toy to one of the children locked in the truck but one of the officers orders the dog to get down. The last scene depicts the ambulance slowly pulling out of the yard; everyday brutality is depicted through images that are suggestive rather than explicit. The viewer is spared from seeing the asphyxiated children, but undoubtedly reminded of the mass killings at Auschwitz and other death camps.

Notes from NCJF film catalog: In this haunting short fiction film, a group of Jewish children and their teacher are herded into an ambulance by Nazis; the vehicle, ordinarily representing comfort and safety, becomes the group's death chamber. Morgenstern's presentation of the incident serves as a metaphor for the horror of the Holocaust. The character of the teacher may be considered an allusion to Janusz Korcak (1879-1942), the Jewish educator who ran an orphanage in the Warsaw ghetto and dies with his young charges at Treblinka. 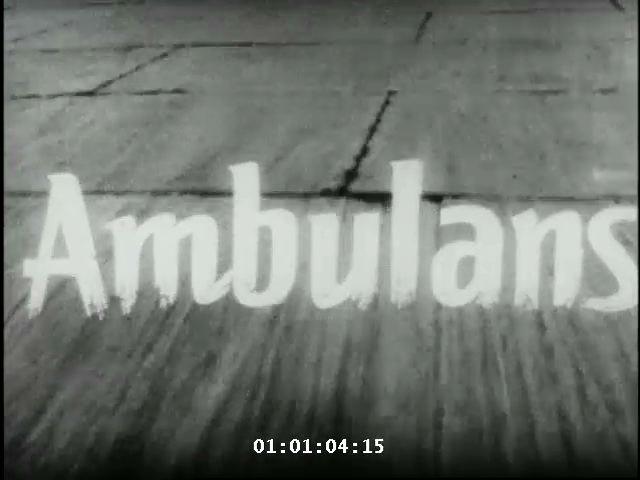 Legal Status
Permanent Collection - not accessioned
Note
Production credits:
Written by Jerzy Lipman and Andrzej Gronau.
Music by Krzystof Trzcinski-Komeda.
Editor: Janina Niedzwiecka
Awarded in 1962 at the San Francisco International Film Festival, Ambulance was made with the participation of some leading contributors to the Polish School, including cinematographer Jerzy Lipman, composer Krzysztof Komeda-Trzcinski, and actor Tadeusz Lomnicki, who is credited as the author of the script. The film was interestingly shot on location at the airport in Lublinek, near Lodz.
Copied From
16mm b/w positive
Film Source
National Center for Jewish Film
File Number
Legacy Database File: 3366