Translation of narration:
Lvov - one of the oldest Ukrainian* cities. (see Notes field) The red flag in the city was raised on September 22, 1939.

City center where the richest people - bank employees, merchants, and factory owners - lived. They introduced themselves brilliantly, when settling in these houses, "Beware, angry dog!" [The sign on a fence reads in Polish "Beware, angry dog"]

Earl Pototsky's residence. And this is the house of the worker Waice's family. The Soviet authority resettled approximately ten thousand workers' families into the houses of run- away Polish landlords in the center of the city.

This is a factory that once belonged to the millionaire Brank. A former factory employee comrade Kuzmitskaya is now deputy director and a deputy of the Supreme Soviet of Ukraine.

Never before has Lvov seen a woman operating a streetcar. Irina Stecyna became a skilled and experienced driver. Streets of the native city lie open before the eyes of another driver Sofiya Boretskaya.

A monument to the poet-genius Adam Mickiewicz. Some of the oldest parts of the city: Rynok Street, a house built in 1557 and known as "Chorna Kam'yanytsya" [the Black stone house].

A 17th century Bernardin Church. In the bright sunshine these dark passing shadows are seen much better [Allusions to monks and the church as the dark institution while the Soviet rule brings light.] And these are the shadows that are gone forever. The actors who play Polish swaggering officers in a new movie "Dream" that speaks about the life of workers in Poland. Director Mikhail Romm is behind the camera.

Friends whose lives underwent crucial changes. We are at Lvov city court. Soviet judges Mirre, Malygina, and Synts. They were entrusted to render justice in the city. One of the judges, Mirre, spent three and a half years imprisoned in Poland. She was accused in underground Komsomol activity and sentenced to 13 years.

Ernerstina Bernbaum was imprisoned in the #112 prison cell. Sunrays would never touch these obscure walls.

Lvov belongs to us! It is Soviet! Now and forever the red flag, the flag of our Homeland, is raised in this dear Ukrainian city!

Ancient fortifications. They saw Bogdan Khmelnitskiy fighting against the Polish landlords so that the people of Ukraine could be united together. 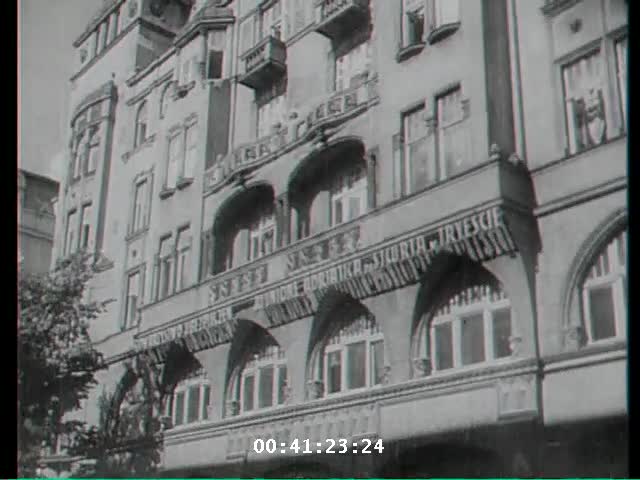 Legal Status
Permanent Collection
Film Provenance
The United States Holocaust Memorial Museum purchased this collection of moving image segments from the Central State Film, Photo and Sound Archive at the Ukraine National Archives in Kiev, Ukraine in 2001.
Note
Original archival order may not have included all footage included in Story 3119.

Lvov can hardly be called a historically Ukrainian city. It was part of the Austro-Hungarian Empire prior to the World War I, and went to Poland after serving for less than a month as the capital of the Western Ukrainian National Republic. It remained Polish until World War II, after which it became part of the Ukrainian SSR. The city, prior to World War II, had long been a multi-ethnic one, and was a major center of Polish, Jewish, and Ukrainian cultures. The Polish, Yiddish, and Ukrainian languages were all prominent in Lvov, and there were many varied places of worship, including Roman Catholic churches, Eastern Orthodox churches, Greek Catholic churches, and synagogues.
Copied From
35mm.
Film Source
Central State Film and Photo Archive of Ukraine
File Number
Legacy Database File: 3423
Source Archive Number: 1699 Reel I