Camp near Babi Yar. VS, EXT, pan of mountainside. The location is Syrets Concentration Camp, located outside Kiev. Pan to prison fences and barbed wire. A sign on wooden fence post reads: "Warning! Prisoners who attempt to cross to freedom will be shot." VS, bodies, INT and EXT of camp, faces of prisoners behind barbed wire, trains.

Tranlsation:
[Natalya Vasylivna - a survivor of Syrets - speaks in Russian] "This is Syrets concentration camp. It's very close to our house. All men were put at the very edge of a ravine. A car came very close to the ravine. And they shot all of them before my eyes. They shot every single one..."

[Ukrainian narration] No matter how badly this documentary might be received, nevertheless it remains the only way to preserve the last live testimonies of those days that we must not forget.

SS soldiers chose Natalya Vasylivna from a "death group" for works in the concentration camp. She had to take care of a German shepherd dog, to bathe it. Every morning the camp commandant would take this dog to bloody executions.

[Vasylivna interrupts in Russian] "The blood would never dry up... [Abrupt] A starving girl...Mother..."

[Russian comment] The train is arriving at its final destination. The journey has come to an end. We have arrived. 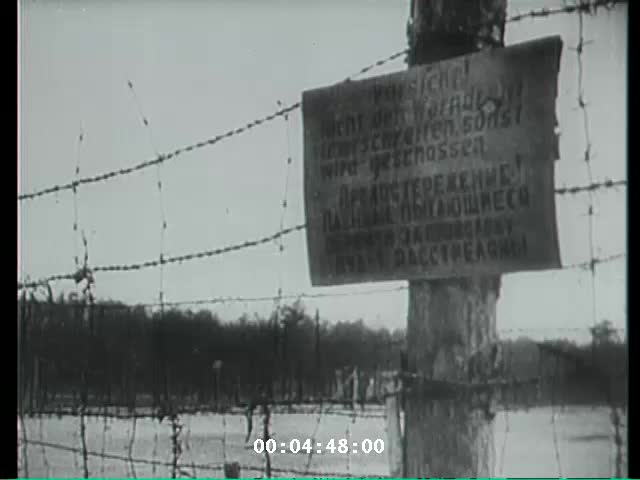 Legal Status
Permanent Collection
Film Provenance
The United States Holocaust Memorial Museum purchased this collection of moving image segments from the Central State Film, Photo and Sound Archive at the Ukraine National Archives in Kiev, Ukraine in 2001.
Note
Syrets concentration camp was situated near Babi Yar. At the time of the war Syrets was one of the suburbs of Kyiv and along with other places, such as, Babi Yar, Dorogozhich, etc., was well-known for its sad fate, since the NKVD had chosen this place to bury killed "enemies of the homeland."
Copied From
35mm
Film Source
Central State Film, Photo & Sound Archives
File Number
Legacy Database File: 3454
Source Archive Number: 1536 Reel I