Compilation of still photos of atrocities. MCU, hanging corpses. VS, a group of journalists in the Babi Yar area. They are writing in notebooks, taking down the words of one man who stands in the center of the circle of journalists, as a witness, there are a few women in the crowd. Journalist speaks to camera, by a ravine, explaining the story of what happened during the massacre. Camera pans down and across the ravine. Several other journalists are standing along the downward slope of the ravine.

Translation of Ukrainian narration and Russian witness testimony:
Novograd-Volynskyi, Zhytomyr [Ukrainian cities]. Yes, this is that famous Paul Blobel whose team committed all those murders at the end of September and in the beginning of October 1941 ...[abrupt] testifies before the members of the State Commission that began investigation of fascists' crimes in Ukraine after Kyiv had been liberated.

A newsreel saved the testimony of a witness Volodymyr Davydov. [Russian narration, the witness speaks] "Here, at this very place, which is called Babi Yar, fascist scum forced us, prisoners, who had accidentally been taken prisoner in 1941, to burn corpses of our Kievan civilians, Soviet citizens, killed by the German monsters during two years of occupation. Here, in Babi Yar, the ovens stood. Stench and stink spread. Under the threat of being shot, we were forced to take the bodies out and put them over the oven. To this place suffocated people, mostly naked women and children, were brought. They were suffocated inside the gas machines. During the time we worked here, we were forced to burn close one hundred thousand Soviet citizens. The Germans wanted to hide traces of their crimes. And after we completed our task they wanted to kill us as well. They failed. Of three hundred people who worked here, twelve survived." 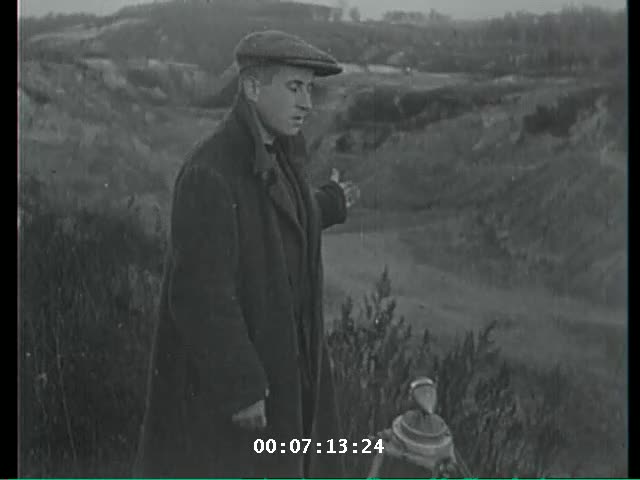 Legal Status
Permanent Collection
Film Provenance
The United States Holocaust Memorial Museum purchased this collection of moving image segments from the Central State Film, Photo and Sound Archive at the Ukraine National Archives in Kiev, Ukraine in 2001.
Note
Note of suspicion regarding the "testimony" in this story: It may simply be because of the witness's language, but his tone is very similar to that of a journalist. Also he mentions that they were captured "accidentally in 1941." This is a sign that his text was either written by someone else or edited very carefully. The official Soviet propaganda refused to admit that the capture of 650 thousand of Kiev's defenders by the Nazis was the result of Stalin's untimely [late] decision to surrender Kiev. Therefore all mentions of this mass seizure had to be introduced as "accidental".
Copied From
35mm
Film Source
Central State Film and Photo Archive of Ukraine
File Number
Legacy Database File: 3456
Source Archive Number: 2048 Reel VI