Brzeziny ghetto, people working in snow, digging, posing for the camera, CUs, etc. Shots of empty streets. Sled with goods dragged in the snow from one house to another. Women and men move about. CU, child with Jude star. 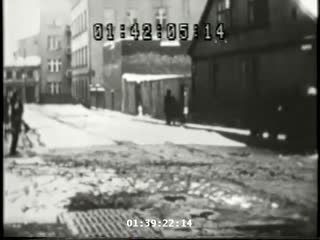 Legal Status
Permanent Collection
Film Provenance
The United States Holocaust Memorial Museum purchased this video collection from the National Center for Jewish Film for general reference in July 2000.
Note
The location of this ghetto has been misidentified over the years as Łódź. On a sign seen in the film appears the name "Loewenstadt" (the German name of Brzeziny). The hanging in Brzeziny took place behind the ruined synagogue. Comparing the synagogue seen in the film with a photo of the synagogue at its glory (Photo Archive 12231) indicates that it is, indeed, Brzeziny.

For a much improved, longer version, see RG-60.4913 on Film ID 2910 (a 2010 joint preservation project). See also Story 4656, Film ID 2848 for another copy of this footage from the original source: The Ghetto Fighters House (Lohamei Hagetaot) in Israel. See also Story 759, Film ID 505 for an earlier transfer of the same NCJF master.

Located near Lodz, the town of Brzeziny had a Jewish majority - 6,850 of 13,000 inhabitants as late as 1939. During the Nazi occupation, a ghetto was established (Feb. 1940) which held nearly 6,000 people and was liquidated on May 19-20, 1942. Elderly Jews were sent to Chelmno and the rest to the Lodz ghetto.
Film Source
National Center for Jewish Film
File Number
Legacy Database File: 3999
Source Archive Number: Pol 3
Featured In
Holocaust Encyclopedia - Historical Film Footage: Lodz ghetto - Featured Use