REEL 1: In the 1930s. Opening scene is of an orchestra playing with big poster of Hitler on wall behind them, they are playing to a full hall of all men who appear to be prisoners. Close shots of the Duke of Windsor seated in the front row with non-prisoner VIPs. Various European royalty. 01:33:35 Politicians and statesmen. League of Nations. 01:38:11 Closeup of book by H.G. Wells, "The Shape of Things to Come". H.G. Wells is asked about "the terrible state of the world today." Lady Astor prophetically says that we can lead the Russians out of communism by trading with them. Great George Bernard Shaw bit. He takes a minute to speak directly to camera before boarding a ship. 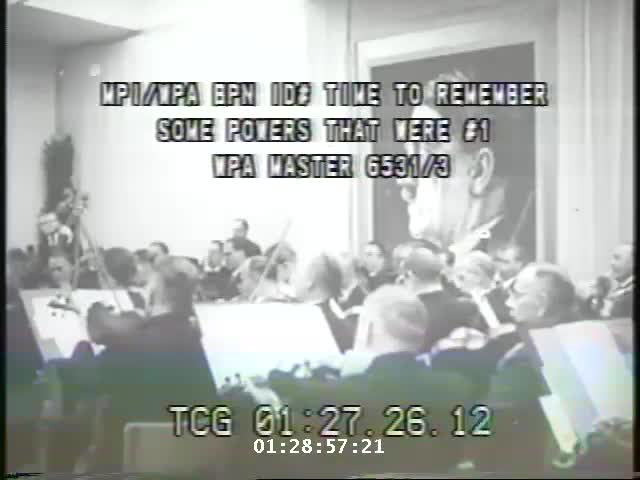 Film Title
Time to Remember: Some Powers that Were

Copyright
Copyright. WPA Film Library
Conditions on Use
The WPA Film Library fully owns or represents the copyright to its footage collection. In certain cases some additional clearances, such as music rights, may be necessary. Contact WPA Sales at sales@wpafilmlibrary.com to secure permissions.
Record last modified: 2020-08-04 09:21:14
This page: https://collections.ushmm.org/search/catalog/irn1002860