Silent with English intertitles.
"Ataman Grigorieff's pogrom in Elisavetgrad 15-17 May 1919."
"The corpses in the mortuary." MS of corpses on the ground.
"A common grave (men)." Still photo of men, many wrapped in prayer shawls.
"A common grave (women)." Still photo of women's corpses laying on the ground.
"A group of massacred brought to Poltava...egam Joseph, Aguz Jacob, 5 September 19." Still, MCU of four corpses laying on the ground, INT.
"The pogrom by Ataman ... in Rzhistsheff*, Governm. Kieff, 14 June 1919." Still, MS, bodies lined up outside, on the ground, alongside a brick building, a woman, in a black shawl is kneeling next to one of the bodies.
"The pogrom in (?)shernikhoff, District Zhitomir, made by the 'povstantzy' (insurgents)"**
"The funeral of the pogrom victims Bershad, Governm...in March 1919." Quick still of a crowd gathered in a public square, HA.
"The pogrom by ataman Grigorieff, Tcherkass, Governm, Kieff, 16-90 May 1919" Still of bodies laid out. Survivors are standing behind the row of bodies.
"Graves of the Slaughtered Reverend J. Silberman (Chief of the Khila) and J. Friedman."
"Corner of the pogrom cemetery in Tcherkass, Governm. Kieff." Several stills of gravestones, stars of David, etc. at cemetery.
"The pogrom in Tarastsha (Tarascha), Governm. Kieff, made by the Budionowtzy"*** of the red army 7-11 October 1920".
"Pogrom Victims in Korosten, Governm. Wolynia." Still of four elderly men, with their faces bandaged [same photo in Story 3174, Film ID 2489].
"The pogrom in Khodorkoff, Governm. Kieff, 24 April 1920, made by the "povstantzy" (insurgents)."
"Groups of wounded, brought to a Kieff hospital."
"The Khodorkoff, Rabbi, the nose cut off and wounded in the head. His wounded neighbour." Two stills of the wounded.
"The Zaitzeff Hospital in Kieff." Still of two wounded men, their head are bandaged.
"The operation of a wounded in the Khodorkoff pogrom." Still of the rabbi described in intertitle.
"The home in Potshaieff str., Podol."
"...nursery in the home on B. Wladimirsky str." Stills, children on beds (wooden platforms without mattresses).

*We believe this says Ataman Zeliony (the first few letters of the man's name are cropped off), who would have been active near Rzhistsheff, which is better transliterated as Rzhischev. However, it more likely refers to Ataman Grigoriev, who was, at times, affiliated with the Green Armies (Zelionye/Zelyonye/Zelenye Armii), and thus was occasionally thought to be Ataman Zeliony (Zeliony is the Russian for green). The rest of the intertitles refer to Grigoriev.

**Most likely the Chernyakhiv/Chernyakhov District in Zhitomir, transliterated as Tshernikhoff.

***Budionowtzy probably derives from Semyon Budyonny, a commander in the Red Army, and, more specifically, a leader in the Red Cavalry during the Russian Civil War. 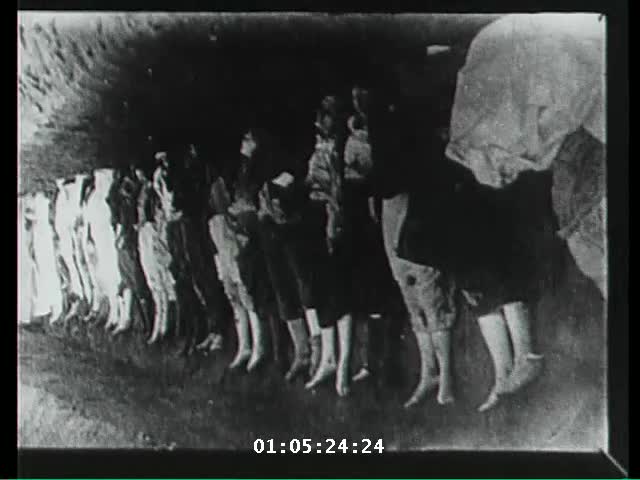