Hitler and Hindenburg in open car

Fox Movietone News. Aerial shots of crowds at the Lustgarten on May Day. A car carrying Hitler and von Hindenburg drives through; they wave to the crowds of schoolchildren (identified by narrator -- children not especially visible). The view switches to Hitler speaking briefly at the microphone, then shows von Hindenburg at microphone. They both solicit cheers from the crowd. 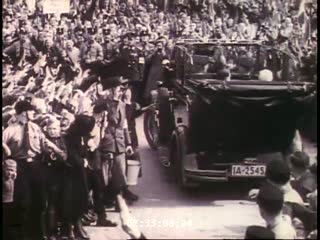 Legal Status
Permanent Collection
Film Provenance
Thaxton Green Studios, Inc., the production company hired by the United States Holocaust Memorial Museum to produce the film titled "Nazi Rise to Power" in the Permanent Exhibition, purchased this footage from the National Archives and Records Administration, Bundesarchiv, University of South Carolina Newsfilm Library, British Movietonews, and other archival sources from September 1991 to June 1992.
Note
The edited newsreel Vol 6 Release 68 was released on Saturday, May 13th, 1933. The stories for that newsreel were (in order):