Title: At the Berlin Sportspalast, the Reichschancellor thanks the assembled SA and SS for their loyalty, their courage, and their perserverance."

Martial music plays as the camera shows the huge assembled crowd from above, standing at attention. Hitler walks through the crowd to the podium and speaks, thanking them for their patience in the past years, stating that he knows that they must have sometimes questioned whether Germany's hour would come, but that now: "That great moment. . . has arrived, Germany is now awakened. . . is the master of her own destiny." Hess and Roehm are visible as well. 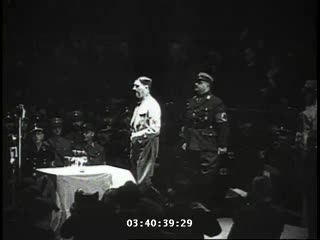