Led by a drummer on a white horse, a cavalry regiment passses through a gate. There is snow on the ground and the breath of the men and the horses is visible in the air. Some of the men on horseback carry and play instruments, while others hold swords. The parade moves along a street, accompanied by a scant crowd which follows along on the sidewalk. There is a gap in the film between 02:25 and 02:28 and a brief blank spot at 03:00. 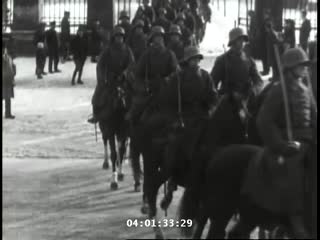