An anti-Hitler rally in Berlin. Heinrich Bruening, then-Chancellor of Germany (he resigned under pressure from president Paul von Hindenburg on May 30, 1932) speaks negatively about Hitler and the consequences to the country should he come to power. The next few scenes seem to be out of order chronologically. The first one shows von Hindenburg exiting a building and getting into his car. A crowd has gathered on the sidewalk and he greets them briefly. The next scene shows von Hindenburg inside the building, presumably before voting. He is instructed to face the camera and pose, and says something inaudible that makes the others in the room laugh. The scene switches back outside to show von Hindenburg's car pulling up at the curb outside the building. He is helped out of his car and enters the building. He is then shown in the voting booth, with the curtain covering part of his back. 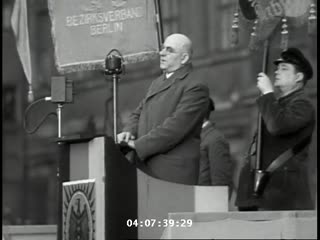