Hitler's car pulls up to a curb and he gets out, dressed in a suit and tie, and salutes a small crowd. People in the crowd take photos of him. There are election posters and placards outside of the bulidng that Hitler enters. Hitler is shown exiting the same building. A larger crowd salutes enthusiastically. As Hitler prepares to drive away, someone in the crowd shouts "Unser Fuehrer!" Hitler hands an envelope (a card?) and a bouquet of flowers to a man in the backseat of the car. A car pulls up outside a different building and von Papen gets out. He wears a black armband (mourning) and carries a cane, although he does not use it and his pace is brisk. Men bearing placards advocating different political parties stand on either side of the doorway that von Papen enters. He exits the building and poses briefly for photographers before getting back in his car. See memo notes about additional footage in this story. 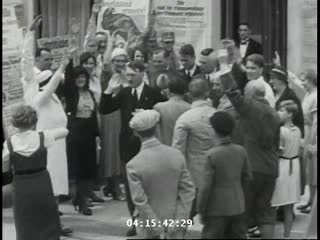