Black Sunday in Krakow. Footage shot from behind a fence (?) shows people being loaded into the back of trucks by German soldiers. Pedestrians look as they pass on the street. Streetcars passing by. People being arrested. Amateur footage, considerable camera movement. Footage probably shot clandestinely.

00:03:25 Home Army partisan group "Kamienczyk". Young boys wearing military-style caps in the yard of a home. They smile at the camera and aim bow and arrows. Unclear if this is related to the next part, which shows the Home Army partisan group "Kamienczyk". About a dozen men in uniforms doing military exercises on a hillside. The next scene shows the partisan unit in the woods performing various tasks. The camera lingers on a man standing at attention and trying not to smile. Cleaning weapons, distributing food from a big pot, eating. Men towelling off after bathing. Some kind of ceremony involving a flag. Next scene: a man on a horse rides up to the group, dismounts, and gives one of the men some kind of written communication. Two men read it and consult a map, which is lying on the grass. They finish reading the map and the rest of the men, who had been lying on the grass, jump to their feet and march down a dirt road.

00:08:28 Plaszow concentration camp in Krakow district August 31, September 4, 1944. The date is what was given by the source archive, but seems unlikely since there is snow all over the ground in the footage. Views from outside barbed wire fence, general views of guard towers, low buildings, barbed wire fences. 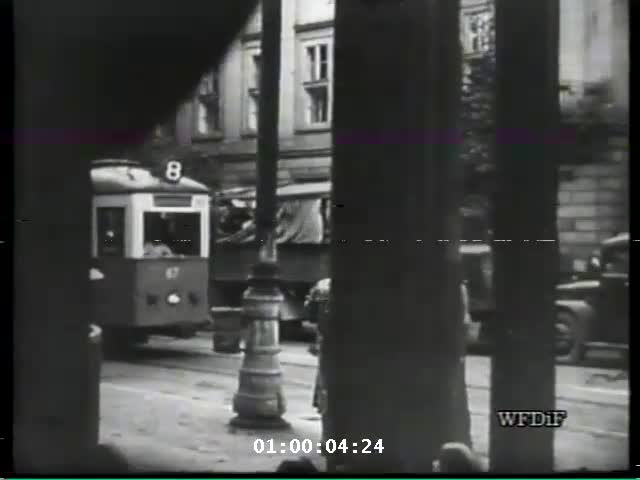 Copyright
Copyright. Filmoteka Narodowa
Conditions on Use
Contact FINA customer service team at dokument@fina.gov.pl for permission to reproduce and use this film.
Record last modified: 2020-08-04 09:21:23
This page: https://collections.ushmm.org/search/catalog/irn1003267