Title: Polens Heer ersteht neu in Persien. [Poland's multitudes rise again in Persia]. Long line of people (look like refugees) moving across a desert landscape. They carry bundles. Some are barefoot. A group sitting, resting. A woman rocks her baby in her arms. Brief fade-out then title: Poland 1939. Refugees on the road on foot and by horse-drawn cart. Food distribution. Bedraggled woman waiting in line with a bowl. Map showing Europe and the Soviet Union. Line drawn from Poland toward USSR south around the Caspian Sea, in direction of Persia (Iran). Group of refugees in desert reach shelter (tents). Distribution of clothing, shoes, to the refugees. Woman combing little girl's hair. A group of people walking together, arms linked, smiling. Low aerial shot of crowds of refugees watching women in kerchiefs performing a dance in front of a (Polish?) flag. Idealized scene of people sitting beside a stream with feet in the water. Sunlight, shadows. People praying in front of a shrine. A cross is visible. People inside eating at large communal tables. Children being taught lessons outdoors. Women doing agricultural work; one leads a donkey pulling a cart. Women marching in uniforms; men marching in uniforms and carrying rifles. 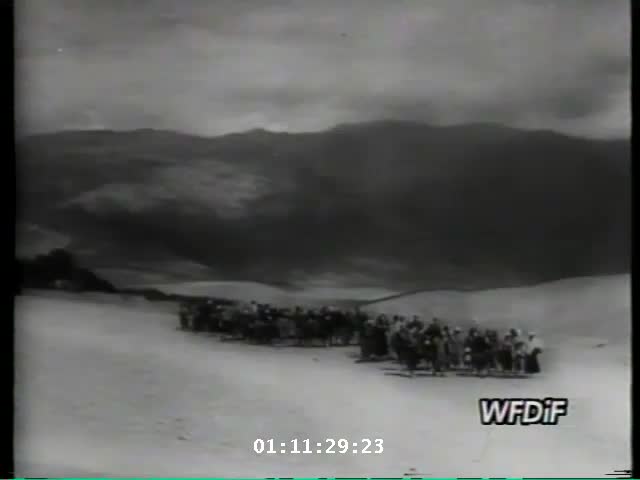 Copyright
Copyright. Filmoteka Narodowa
Conditions on Use
Contact FINA customer service team at dokument@fina.gov.pl for permission to reproduce and use this film.
Record last modified: 2020-08-04 09:21:23
This page: https://collections.ushmm.org/search/catalog/irn1003270