Polish narration. Former Auschwitz prisoners walk slowly past the barbed wire fence. There is snow on the ground. Well-known Soviet footage of uniformed prisoners looking solemnly at camera through fence at liberation in January 1945. Aerial pans of camp. Blueprints or architectural drawings of camp. Interior of barracks with women. "Arbeit macht frei" gate. Pages of photographs. Woman and child stand stiffly outside in front of building; corpses on the groud around them. Survivors exiting barracks, carrying blankets, bundles, being escorted by Soviet soldiers. Horse-drawn carts carrying survivors going through gate. Children with nurses and soldiers, and nuns. Children show tattoos. Crematoria, human remains, Zyklon B. Witness (?) giving testimony to men seated around a table. Mass graves; woman gives testimony to Soviet soldiers, who take notes. Prisoners demonstrate torture devices. Several prisoners are named -- focus on their tattoos and their prisoner numbers. Inspection of bales of hair, teeth, etc. Soviets holding up children's clothing. Procession of people at a memroial ceremony as a dirge plays. Huge crowds and rows of wooden coffins. 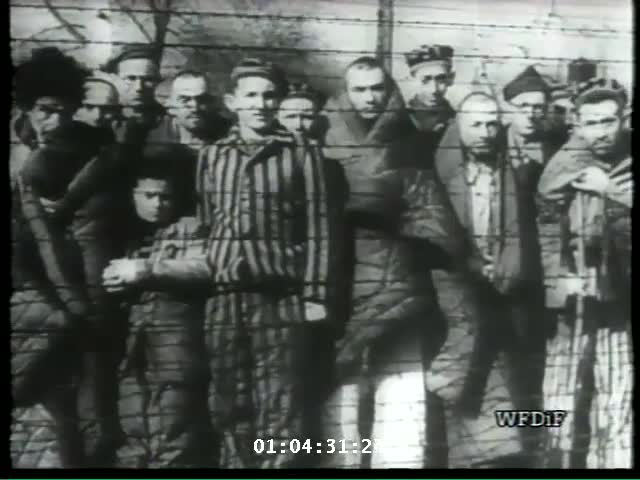 The Soviet film on atrocities - Film Documents of the Atrocities committed by German Fascists in the USSR (Kinodokumenty O Zverstvakh Nemetsko-Fashiskikh Zakhvatchikov) - with scenes of Auschwitz was presented as evidence on February 19, 1946 (Day 62 of the trial) under Document USSR-81.
The Soviet film about the liberation of Auschwitz was shot over a period of several months beginning on January 27, 1945, the day of liberation. It consists of both staged and unrehearsed footage of Auschwitz survivors (adults and children) taken in the first hours and days of their liberation, as well as scenes of their evacuation, which took place weeks or months later. The film includes the first inspection of the camp by Soviet war crimes investigators, as well as the initial medical examination of the survivors by Soviet physicians. It also records the public burial ceremony that took place on February 28, 1945 for Auschwitz victims who died just before and after the liberation. The order to make the film was issued by Mikhael Oschurkow, head of the photography unit, and was carried out by Alexander Voronzow and others in his group. Eighteen minutes of the film was introduced as evidence at the International Military Tribunal in Nuremberg. Another segment of the film disappeared for forty years before resurfacing in Moscow in 1986. [Source: Alexander Voronzow interview, Chronos-Films, The Liberation of Auschwitz, 1986]
Film Source
Filmoteka Narodowa
File Number
Legacy Database File: 4031
Source Archive Number: MF 068