Color footage of daily life in Nazi Germany, Austria, Hungary, and Czechoslovakia in August 1937 shot by a dentist during his vacation from the northeast of England. Thomas Henry Brown and his wife, Kate Brown (nee Spittle) left their 3 year old child with paternal grandparents to go on an extensive tour. Tom had some German language skills. It was their second visit to Germany.

Title: "A Tour of Central Europe / August 1937," "Photography and Titles by T.H. Brown" Pedestrians walking past train, boat, CUs. Sign, "KAAI-OSTENDE-QUAI." Cranes. Sign, "London Oostende-k Bruxelles no Aachen Koln." Title: "South Germany. After 20 hours in the train we arrive in Munich" Title: "News" MS, street lamp pole plastered with posters, including one about the SS. Pedestrian stops to take a look. CU, posters.

00:04:25 Title: "On the Way [graphic of an arrow pointing up]" Shots of an automobile and motorcycle accident, damage, spectators, a man with a bloody head wound. Shots of the damaged vehicle and people trying to move the damaged car. Title: "Austria. Kitzbuehel, where ex King Edward VIII stayed" "Grand Hotel" in Austrian alps, chalets. Title: "On the Way to Salzburg (Austria) we pass through a strip of German territory" Title: "Germany. Berchtesgaden. The salt mine is an attraction" Visitors dressed in old fashioned miners' costume queue in a line marked for "Zur Bergeinfahrt" [To the mountain entrance]. Getting off small train, a girl in a costume being photographed. Tourists, bus. Title: "Austria. Salzburg, renowned for its Musical Festival and its castle view" Tourists getting off bus, various shots. Kate Brown leans over a railing to look at the view, probably filmed from the Hohensalzburg castle. Flag at top of tower. HAS overview of the city of Salzburg. Tour guide dressed in costume. Title: "Austria. On the way to Linz we stop at Gmunden" Bust of Schubert in the park at Franz-Joseph-Platz and views of lake Traunsee where swans swim and women wash clothes in the lake. Kate Brown stands in front of a bus marked "Elite" and talks to an older woman named Ellie. Title: "Linz on the Danube" Shots of a monument commemorating soldiers from World War I. Old woman uses a scale to measure some kind of food for sale. CUs women selling various items including flowers. Scarves for sale in a shop window.

00:08:52 Title: "From Linz to Vienna we sailed along the famous Blue Danube" Views shot from the boat. Women on the boat. Title: "Austria. Duernstein Castle, the scene of the imprisonment of Richard the Lionheart" Castle seen from boat. Title: "Vienna. Schoenbrunn Castle, home of Emperor Franz Joseph" The title card includes a drawing of Franz Joseph. Shots of the castle, with tourists, gardens, brightly colored flowers, park with fountain, pathway, and the Gloriette. 10:23 Kate Brown walks down a tree-lined path. Title: "Vienna. The Chancellory where Dolfuss was assassinated in 1934" MS of the Federal Chancellery building in the Ballhausplatz where Engelbert Dollfuss was assassinated by Nazis in 1934. Title: "Hoeldrichsmuehle, beloved by Franz Schubert" Bus in front of building. Kate Brown appears briefly in front of a wall mural depicting musical notes.

00:10:59 Title: "The Danube, on the way to Budapest" Boat leaving from harbor, lots of people crowded at dock. Shots from boat. Hungarian flag flies from the ship as it passes another ship flying the swastika flag. Title: "Hungary. Budapest" Street scenes, tram, bridge, boats on river. Title: "Budapest, the first "Tube" on the continent" Entrance to the underground. Sign, "FOLDA LATTI." Kate Brown walks up the steps from the subway station.

00:12:23 Title: "Budapest. Millennium Memorial" Heroes Square and the Millennium Monument with large central cenotaph supporting a bronze statue of Archangel Gabriel. Title: "The Unknown Warrior" Kate Brown stands at base of statue with a large wreath. Title: "Saint Stephen, First King of Hungary" Huge statue of St. Stephen. Title: "Saint Gellert's" People swim in the artificial waves in the Gellert thermal baths. 13:27 Dr. Tom Brown waves to the camera from the bath. Title: "Hungary. A trip to the Bugac Puszta (Hungarian Plain)." Woman getting into automobile. Sign, "Kecskemet" on building. Stop sign, parked cars. CU, stop sign, "Behajtani Tilos" Kate Brown sits at an outdoor cafe with several others. Women, including Kate Brown, get off a train. The women look at three cskikos, Hungarian horse herders, on horseback. Kate Brown and another woman board a horse-drawn wagon. Many horses and cattle in a field. Two of the horse herders demonstrate techniques with a whip, which the tourists try to emulate. Title: "Chicken a la Pole!" Chicken cooked on large outdoor barbeque while tourists watch. Title: "The Czardas" Demonstrations of the Hungarian national dance.A Guard and man in costume laugh. Guard smokes a cigarette. Shot of a train at a station.

00:16:23 Title: "Czechoslovakia Praha - Prag - Prague" Train official in uniform stands on the platform. A woman peddles cloth goods on the street. Train arrives. Title: "The Castle and St Vitus Cathedral" A bus of tourists pulls up to the entrance of the courtyard. Shots of the Matthias Gate, the castle courtyards, and a military guard. Spires of St. Vitus Cathedral seen in the distance. Kate Brown looks up at a column. The main entrance to St. Vitus Cathedral and close ups of its spires and clocks. Statue of St. George, made by Piecnik, stands in a castle courtyard. Title: "Prague. Alchemist Street" Shot of Prague’s Golden Lane in Hradcany. Title: "2PM" Face of the Astronomical Clock in Old Town Square. Title: "Prague. Czechoslovakia. Tyn Church, built on the site of the old town wall (Tyn)" Shot of the Church of Our Lady Before Tyn in Old Town Square.

00:18:02 Title: "Prague. One of the many synagogues" Kate Brown walks toward the synagogue. Title: "Prague Hebrew crucifix" Traffic passes the Crucifix and the Calvary statue on the Charles Bridge. Close-up of the corpus Christi and Hebrew text. Flowers left at the statue. Shot from a train as it leaves the station. Train enters a station. Women watching the sunset on a ship. Exterior of an unmoving train compartment. Sign: "Kings Cross and Aberdeen." Trains enter a station. Two crates of empty bottles and cups. Title: "Dufaycolor 16mm Cine Film by T.H. Brown" 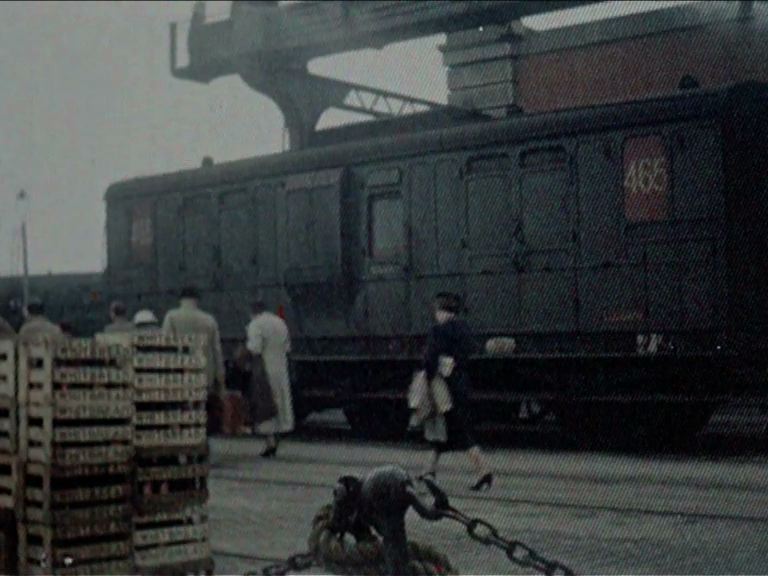 Biography
Tom and Mabel Corby were married in 1905 and their only child Tom Henry Brown was born in 1906. Tom Brown Junior followed his father into dentistry, attending the College of Medicine, Newcastle on Tyne, in 1923 and completing his pupillage and studies in 1928. He then joined his father’s successful dental practice. At the end of the decade, father and son became interested in filmmaking. Tom Brown Junior was appointed Chairman of the Teesside Cine Club, founded in 1929 by his friend Wilf Maxwell. The cine club produced low-budget dramas and comedic sketches, as well as screening films by individual filmmakers.

Legal Status
Permanent Collection
Film Provenance
The film was shot by Dr. Tom H. Brown, a dentist from northeast England, during his vacation to Europe in 1937. His son Tony donated the film to the Northern Region Film and Televison Archive. A copy was donated to the United States Holocaust Memorial Museum in November 2004. The master DVD is missing the last 184 feet of original film which contains footage of synagogues in Prague because that part of the film is badly damaged with mangled perforations; the lab in England is still working to restore the film. The Museum received a new digital transfer containing the complete film in 2013.
Copied From
16mm Dufaycolor reversal
Film Source
North East Film Archive
File Number
Legacy Database File: 4489
Source Archive Number: 10251