Home movies of the Ascher Family, featuring daily life and vacation outings of this German-Jewish family in the 1930s. The Aschers immigrated to Palestine in 1938 and later to the United States in 1959. The Ascher family outings were mainly in Saarow-Pieskow, near Berlin. They visited a pension owned by Paul and Lotte Zeidler, a Jewish family who went to Shanghai when they left Berlin. Their son, Rolf, is shown in some scenes. The pension was named PAROLO after Paul, Rolf, and Lotte [this name can be seen on a powerboat later]. The Aschers visited in both summer and winter; trips became more frequent as the situation in Berlin grew dire.

00:02:25 In springtime in Saarow-Pieskow, family eating at restaurant, lounging, playing in the park, posing on path for the camera. Shots include Werner David, a close Ascher Family friend who as an avid amateur photographer did most of the filming.

00:03:30 Wolfi with his mom Ilse in Berlin. Other family members, including Hans's mother Helene Luise (Jaroczynski) Ascher and her brother Carl, and the nurse crowd around carriage.

00:04:00 Another shot of the baby Wolfi in the carriage on street with a winter hat (colder weather). CUs family members and another child. Wolfi clapping, children. Several shots of family walking towards the camera, pushing carriage.

00:05:30 In front of house at PAROLO in Saarow-Pieskow, Ilse, Wolfi, and Ilse's parents Paul Lande and Marie (Meyer-Hirschfeld) Lande eating, playing, in garden.

00:05:38 Skiing and sledding in Switzerland, circa 1935. Various shots of Wolfi, Werner David, and Ilse. with church in BG. CU, family posing on sled, large administrative building in BG.

00:07:23 Sledding amidst trees in Switzerland. Wolfi sledding with Hans. Dog named Lucky (left behind when the family left Germany).

00:07:55 Ilse with Gaby, posing in front of house. Gaby trying to crawl in the garden, crying.

00:08:15 Rowboat in Bad Saarow. Wolfi playing with a girl near an outdoor table, filling water tank, and picking berries.

00:09:06 Blurry shots of Ilse with baby Gaby, crying while trying to crawl.

00:09:23 In Bad Saarow, Werner David swimming in lake, Hans and Werner waterskiing. Giving a child a piggyback ride that lands him in the lake. 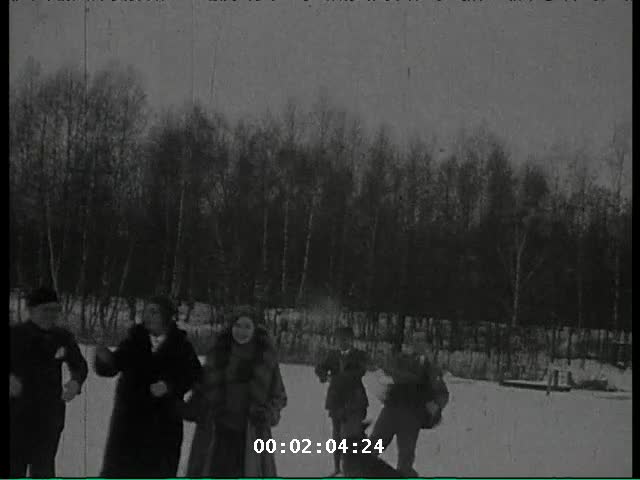 Biography
Werner David was born in Berlin on September 4, 1903. He died in Berlin on January 17, 1989. He was the son of Albert David and Berta (Betty) David (geb. Weinberg) of Berlin. His father was a prominent banker and member of the Berlin Stock Exchange. Until his immigration to Palestine in 1938, Werner David was also a banker at his father's bank and was also a member of the Berlin Stock Exchange. He won many prizes in motorcycle, automobile, and boat races. He never married and had no children. His address in Berlin was Wilmersdorf, Prinzregentenstr. 6. Werner David was an old and close family friend of the Ascher family. He left Berlin with the Ascher family and lived with them for most of his life after immigrating to Palestine in 1938 and later to the United States in 1959. He and Hans Ascher were business partners, first in Palestine/Israel where they owned an operated a taxi company, and later in Los Angeles, where they owned and operated a gas station.

Hans Ascher (1902-1973) was employed by his father-in-law Paul Lande (1869-1936) and his uncle Carl Jaroczynksi (1874-1955) in the knitting factory "Felix Lande - Strumpf Strickerei, Tricotagen und Strickgarn Fabrik." Carl encouraged Hans to pursue his partner's daughter Ilse (1908-1982) after he was brought into the business. Ilse married Hans in Berlin on October 27, 1928. Before immigrating to Palestine in 1938, the Aschers often went on holiday to Saarow-Pieskow, near Berlin, with their children Wolfgang (1930-1992) and Gabriele (b. 1936). In Palestine, they settled in Ramat-Gan with Werner David (1903-1989), a close family friend who filmed most of these home movies, where they owned and operated a taxi company for 20 years. In 1959, Hans and Ilse moved to the United States and settled in Los Angeles. Wolfgang immigrated to the U.S. in 1947, and after graduating from high school in New York, served in the U.S. Air Force. He changed his name to Robert William Asher after becoming a U.S. citizen and had two children with his wife Marie Freidin. Gabriele served in the Israeli Army before immigrating to the U.S. in 1957. She married Joseph Michels in 1959, had two children, and lives in State College, PA.

Copyright
Copyright. Dina Michels, Jewish Museum Berlin
Conditions on Use
Contact Dina L. Michels, the daughter of Gabriele Ascher Michels, and the Jewish Museum Berlin for permission to reproduce and use this film footage.
Record last modified: 2020-02-04 10:40:42
This page: https://collections.ushmm.org/search/catalog/irn1003670

Home movies of the Ascher Family, featuring daily life and vacation outings of this German-Jewish family in the 1930s. The Aschers immigrated to Palestine in 1938 and later to the United States in 1959. Film shows scenes primarily in Saarow-Pieskow, near Berlin, and Switzerland.