Meeting of the Jewish Anti-fascist Committee, 1944

A meeting of the Jewish Anti-Fascist Committee at the Kolonny zal [Columnar Hall] in the House of Unions, possibly on July 26, 1944. The meeting was meant to raise funds for the Soviet war effort. Members of the committee and military officers sit on the stage beneath a huge portrait of Stalin. Long shot of Solomon Mikhoels as he reads a speech (mute). Pan across the other men on the stage. Participants, in high spirits, sign a petition: David Bergelson signs at 01:07:08, Mikhoels signs at 01:07:33, Abraham Sutzkever signs at 01:07:52 and Ilya Ehrenburg signs at 01:07:58

At a meeting on July 26, 1944 Ilya Ehrenbourg gave a speech about the Germans' genocide of the Jews after seeing mass graves in Maly Trostinets in early July. 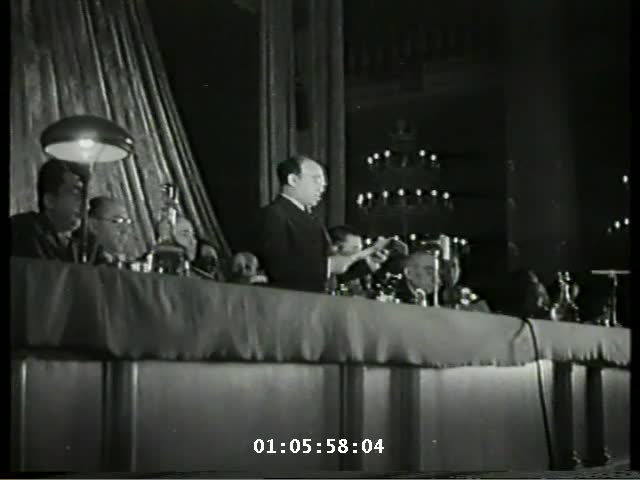 Credit
Accessed at US Holocaust Memorial Museum, courtesy of Russian Archives of Documentary Films and Photographs