Color. Shots of the cemetery at night, followed by a sketch that Kessel drew showing how the partisans shot the Germans from hiding places in the cemetery. The next scenes show the gruesome executions of civilians in the cemetery. Members of the Grossdeutschland regiment and Serbian civilians inspect the corpses of men who were lined up against the cemetery wall and shot in reprisal for the killings of the Gemans. Several men are hanged in the cemetery. In his narration, Kessel points out that these are not partisans but civilians who are being executed as examples. Serbian civilians perform the hangings. After each man is hanged the executioner pulls down on his legs to make sure he is dead. The one woman who was executed can be seen in a shot of the group of hanging bodies. Men are lined up against the cemetery wall and shot by the members of the Grossdeutschland regiment. A soldier uses a pistol to shoot one of the men again. Scenes of a funeral (for the German soldiers killed by the Serbs?) in front of the City Hall. Catholic clergymen walk in front of flag-draped coffins. The pallbearers wear swastika armbands. LS of civilians giving a Hitler salute. Paula is one of the people participating in the funeral cortege. Shots of an evangelical minister and a Catholic priest giving eulogies. The coffins are lowered into the ground. 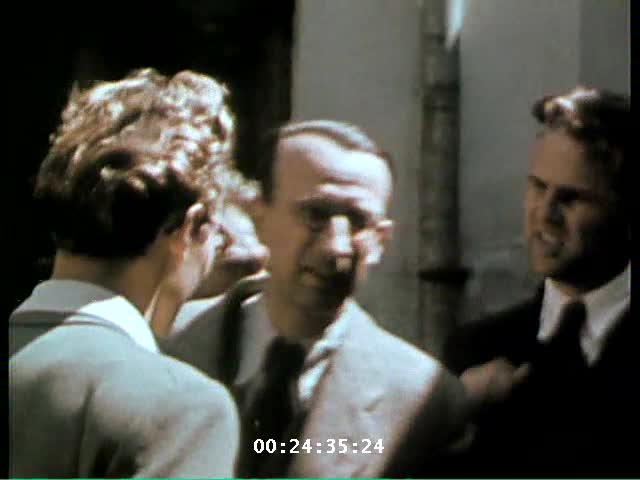 Legal Status
Permanent Collection
Film Provenance
The United States Holocaust Memorial Museum received a video copy from Spiegel TV in June 2007.
Note
Refer to the USHMM Photo Archive for photographic stills of this action taken by Gerhard Gronefeld, a German photographer, who, as a member of the propaganda company in the German army during World War II, documented German atrocities in Yugoslavia and Poland.

This film documents the action carried out by the Grossdeutschland regiment in reprisal for the killing of four German soldiers by unidentified snipers on April 18, 1941. Altogether 22 Serbian civilians were hanged in the Pancevo city cemetery, while 18 more were publicly shot against the cemetery wall by troops with the regiment.

Copyright
Spiegel TV
Conditions on Use
Contact Spiegel TV at ulrich_meyer@spiegel-tv.de for permission to reproduce and use this film.
Record last modified: 2021-06-03 12:41:38
This page: https://collections.ushmm.org/search/catalog/irn1004225