Brief shot of crowds at a swimming pool (see notes about the history of this footage). Title on screen reads: Die Synagoge brennt! 10.11.1938. [The synagogue burns! 11-10-1938]. Footage of the dome of the Bielefeld synagogue on fire interspersed with shots of bystanders watching it burn from open windows and balconies. The dome is consumed until just the frame is visible, then it collapses in on itself. Shot of crowds of people in the street. Briefly visible on screen is the next title: Der Krieg bricht aus! 1.9.1939 [The war breaks out! 9-1-39]. 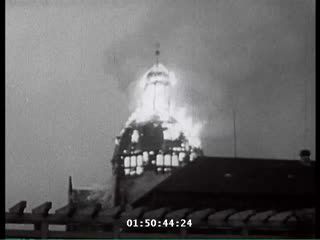 Legal Status
Permanent Collection
Film Provenance
The United States Holocaust Memorial Museum purchased this footage from the Bundesarchiv in December 2008 for use in the special exhibition, "State of Deception: The Power of Nazi Propaganda."
Note
Gerlinde Lorenz is the daughter of Gustav Wittler, who shot this and other footage in Bielefeld and later made an amateur documentary about the town during the years 1938 - 1953.
Copied From
16mm
Film Source
Bundesarchiv (Germany). Filmarchiv
File Number
Legacy Database File: 5268
Source Archive Number: 3686

Copyright
Copyright. Juergen Lorenz
Conditions on Use
Researchers must obtain permission from Mr. Juergen Lorenz in order to reproduce and use this film footage.
Record last modified: 2020-08-04 09:21:51
This page: https://collections.ushmm.org/search/catalog/irn1004369