Guderian's forces in and around Smolensk

Heinz Guderian's 29th Infantry Division in and around the city of Smolensk during the German capture of Smolensk in July 1941. Dark shots with flames in the distance. Good nighttime shots of German soldiers rushing past the camera as Smolensk burns. Flames everywhere and smoke billows into the sky. 01:24:08 Now daytime: soldiers walk about the city. Posters affixed to a pole: an advertisement for Igor Yuzhin's circus "Segodnja i Ezhednevno" [Today and Everyday]. Another poster features a caricature of Napoleon fleeing with caption "Tak Bylo." [This is how it was] followed by a caricature of Hitler impaled on a bayonet with the caption "Tak Budet" [This is how it will be]. Another poster shows a soldier using his rifle-butt to crush four lizard-like claws arranged in the shape of a swastika. Below the hammer-and-sickle symbol is the phrase "Bej Fashistskogo Gada!" [Crush the Fascist Scum!]. The Russian "gad" is used in the same way we would use "scum" in English, but literally means "lizard" or "reptile", hence the claws. Pan of a street: most buildings are damaged and some are still smoldering. HA of the smoldering city. 01:24:42 Nightime again. Visibility is low except for light shining off smoke from buildings. 01:25:00 Daytime, with a view of heavily damaged buildings. Street scenes feature examples of several types of Russian architecture: a Russian church, plain homes and/or shops, and Stalinist (most likely an administrative building). German soldiers administer medical aid to a Russian woman, examine a collapsed bridge, investigate a downed plane, and drive down a country road, along which dozens of Soviet POWs are sitting or lying down. 01:26:24 Back to the city: more scenes of rubble. A large statue, possibly of Stalin, has lost its face and has had a drum, a rifle, and a flag hung on it, and a helmet placed on its head. German soldiers examine an abandoned Soviet armored train. More shots of rubble in the city, a destroyed streetcar, two statutes of smiling girls practicing athletics, downed planes, and fires blazing in the city at night.

01:28:28 Back to the countryside. Still in the Smolensk environs? German soldiers make and eat pancakes out of doors, then float a truck over a river on a raft. Shots of another armored train and destroyed track. Several soldiers and officers stand at attention. Nice shots of one of the soldiers receiving an Iron Cross, then several of them pose wearing their medals. A light German plane flies overhead, then lands in a field, where Russian villagers (mostly young boys) gather to watch. Shot of a Russian war-effort poster, featuring a worker gesturing with his outstretched arm to a fleet of planes and tanks, with the words "Bol'she metalla, bol'she oruzhija! [More metal, more weapons!], then a poster depicting a factory worker and Soviet soldier holding a bomb-shell, with the phrase "Narod i Armija Nepobedimy! [The People and the Army are Invincible!]. A third poster shows a bomb landing on Hitler and reads (partially illegible): "We will wipe away the fascist barbarians!" (?) Another poster shows two snakes arranged in the shape of a swastika, while a Soviet soldier bayonets one of them in the throat. It reads "Death to the fascist serpent!" Cut to two German soldiers stepping out of a tent, followed by a flock of geese herded by a couple of Russian boys. German military vehicles travel down a very dusty and then muddy road to another recently-erected pontoon bridge. German soldiers operate artillery and machine guns in a field, then enter a village. 01:31:52 Very nice shots of German soldiers walking past small thatched-roof buildings. Soviet POWs are arrested in a field. LS of German soldiers moving across a field and firing artillery. Russian woman dressed in white, then a burning wooden house. 01:32:53 Very nice quality shots of Soviet soldiers surrendering to and being searched by Germans. Some of the POWs are captured while in trenches dug into the ground and some look terrified. German soldiers use sheaves of hay or wheat to release vehicles stuck in very deep mud. Two German soldiers operate communications equipment in a field. Soldiers cross fields with standing water and mud, then cross a railroad bridge. 01:35:38 Cut to a shot of the silhouette of a German soldier holding his rifle and shot from a low angle to give an artistic effect. Soldiers approach a village, lob grenades and set fire to buildings. CUs of dead Soviet soldiers. Germans bandage a wounded comrade (?). A Soviet soldier surrenders. More Soviet POWs walk down a muddy lane past thatched huts and then through a field and down a road. German soldiers camouflaged with tree branches on their helmets step out of a line of trees and begin running across a meadow. Tanks roll across a field. Panning shot of soldiers making their way across a field. 01:37:57 Columns of smoke rise in the distance, then shots of burning houses and German troops and tanks moving past. Cut to a poster decorated with stamps. Lenin is recognizable in the bottom center. 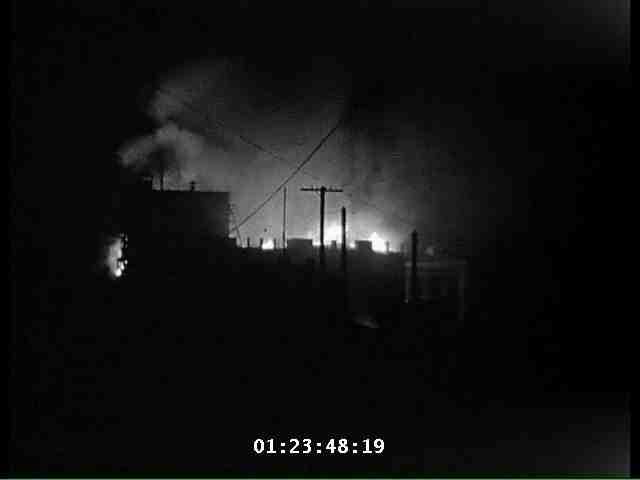 Copyright
Copyright. La Camera Stylo
Conditions on Use
Contact La Camera Stylo at info@lcs-film.de for permission to reproduce and use this footage.
Record last modified: 2020-08-04 09:20:03
This page: https://collections.ushmm.org/search/catalog/irn1004562