Movietone Newsreel. Title: "Memorial Pageant to the Persecuted Jews of Europe-arranged by A. A. Brown, described by Lowell Thomas (Movietone News)". Shots of the pageant stage at Madison Square Garden in New York and the audience in the BG. The event was organized by the "Committee for a Jewish Army of Stateless and Palestinian Jews".

Thomas narrates: "The pageant 'We Will Never Die' is New York's Jewish protest against Nazi massacres." An actress speaks: "In Lublin, five hundred of our women and children were led to the marketplace and stood against the vegetable stores we knew so well. Here the Germans turned machine guns on us and killed us all. Remember us." Thomas narrates: "And a great dramatic appeal is made as Paul Muni tells of Nazi crimes against helpless people." Muni: "There are four million Jews surviving in Europe. The Germans have promised to deliver to the world, by the end of the year, a Christmas package of four million dead Jews. And this is not a Jewish problem; it is a problem that belongs to humanity, and it is a challenge to the soul of man." Thomas narrates: "Then a lament for two million people."

A large chorus, dressed in white, sings an elegy for the two million dead (original sound). The stage is set with two very large backdrops in the shape of tombstones, with Hebrew script on them. 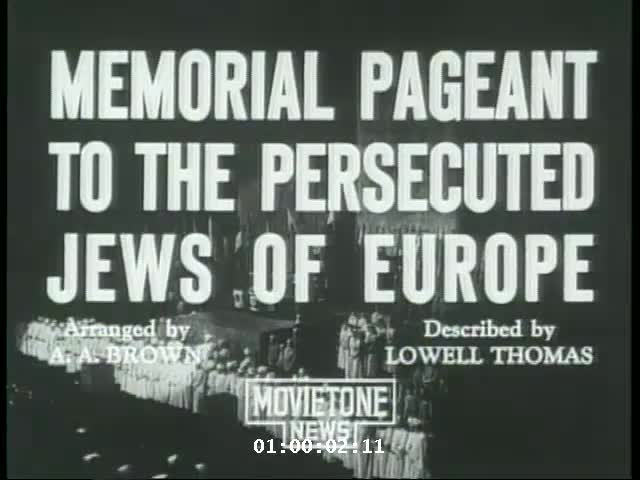 Film Title
Memorial Pageant to the Persecuted Jews of Europe