17:05 Cerdini deposits into the record a magazine article written by Vergès in 1987, presented to the court by the prosecution

17:05 Cerdini calls another witness, Srul Kaplon, to testify, and he presents himself to the court; Mr. Kaplon is a civil party in the suit against Barbie

17:06 On March 23, 1943, the witness was taken by two Gestapo agents to the Hotel Terminus, along with his parents, brother, and sister; there, he was beaten and interrogated by Barbie; he told Barbie that he did not speak German, and Barbie replied that 'all Jews speak German'; Barbie showed him a large group of identity cards and told him that if he could denounce one of the people pictured as a Jew or as a Resistant, he would be freed; he did not, and was beaten; Barbie unleashed a dog to bite him; he was sent to the Montluc prison

17:12 The witness was sent from Montluc to the Fresnes prison, where he spent months and was interrogated by the French authorities; Mr. Kaplon was then sent to Drancy, where he found his brother; they were sent by train to Birkenau; he describes the arrival at Birkenau; he was forced to work in the Jawiszowice coal mine, a few kilometers from Birkenau, as well as working to build a new camp in the Auschwitz complex; he suffered an accident and was taken to the 'revier' (infirmary), and describes his life there

17:18 Mr. Kaplon was meant to be taken to the crematoria, but was saved by another inmate who recognized him from Drancy, and he spent the next several months in a disciplinary kommando; he was sent on a death march to Dachau as the American and Russian armies approached the camps, and then to the Gross Rosen and Muldorf camps before being liberated in May 1945

17:22 The witness attempts to describe life in Auschwitz, and explains that twenty members of his family were killed in concentration camps

17:29 President Cerdini calls another witness, Marcel Stourdze, and he presents himself to the court

17:31 Mr. Stourdze describes his arrest in Lyon and his imprisonment at Montluc; he was then transported to a basement of the Gestapo headquarters in Lyon, where he was eventually interrogated by Barbie

17:40 The witness describes life in Montluc and the particular challenges that women were presented with (lack of modesty and feminine hygiene products)

17:42 Mr. Stourdze was transferred to Drancy and then to Auschwitz III (Monowitz), a forced labor factory; he describes having his body shaved and then doused with gasoline, to ensure he carried no lice; the witness describes 'obedience exercises' run by SS officers, in which he and the other members of his kommando were forced to run back and forth, and the officer killed the slowest member; he worked on a kommando placing steam pipes in a trench; he describes meals in the camp and the daily Appel, as well as the painful method by which the Nazis tattooed inmates

17:52 The witness describes working as a secretary in the camp's infirmary, where he watched, helpless, as the rabbi of Lyon die of a pulmonary infection

17:54 Mr. Stourdze describes the evacuation of Auschwitz in January 1945 on foot to Gleiwitz, and then by coal train to Mauthausen and Oranienburg; the witness was then sent to Flossenburg, where there were inmates of several concentration camps; they were forced under scalding water for 20 minutes, and then made to stand outside naked in the bitter cold for three hours; the witness stayed for two weeks before being transferred again, to Regensburg, where he worked constructing a runway for a jet engine factory; Hermann Göring arrived and inspected the facility, which was riddled with lice and typhus; the facility was bombed and many inmates died; those who survived were forced to reconstitute the corpses of the dead, to prove that no one had run away 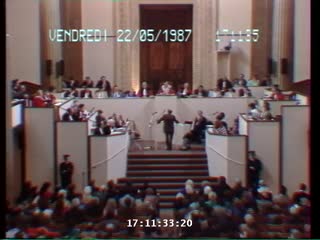