13:43 The bailiff reads the names of the witnesses scheduled to give testimony in the session

13:45 Cerdini suspends the session while the bailiff goes to Barbie to compel him to appear

14:12 Cerdini calls the session to order; the bailiff reads Barbie's statement, explaining that he refuses to appear; one of the witnesses scheduled to appear has not responded to contact attempts, and is not present

14:16 President Cerdini calls the first witness, Mr. Henri Borgel, to the stand; the witness presents himself and is sworn in

14:18 The witness' father owned a candy factory, and on April 6, 1944, he saw several trucks full of children drive into the factory's central courtyard. Though the witness did not know it at the time, the children had just been taken from Izieu. He saw German officers descend from the trucks and ask to speak with the factory owner (the witness' father). While the trucks refueled in the courtyard, the witness ran 3 km to a nearby village, and alerted a local Resistance leader to what was happening; the Resistance leader told him that there was not enough time to subvert the Germans' plan to transport the Izieu children East, and when the witness returned home to the factory, the trucks were gone

14:21 President Cerdini asks the witness to provide detail regarding the candy factory and why the German trucks stopped there; he asks for clarification regarding one of the children, who was the nephew of a woman working in the factory, and who was allowed to leave the other children with his aunt

14:25 President Cerdini asks calls the next witness, Mrs. Edith Klebinder, née Muller, to the stand; she presents herself to the court and is sworn in

14:26 Mrs. Klebinder testifies; she was arrested in Lyon on March 20, 1944, in a UGIF office on the Rue de l'Hotel de Ville in Lyon; she was interrogated at the Gestapo headquarters on Avenue Berthelot, and subsequently imprisoned at Montluc before being transported to Drancy; on April 13, 1944, she was transported from Drancy to Auschwitz, and was handed a Polish bank note by an SS in Drancy prior to departure; the witness details the travel to Auschwitz, and describes several of her fellow deportees' struggles en route

14:33 Because the witness spoke German and French, the Nazis charged with selecting whom to send to the gas chambers and whom to send to work forced her to interpret their questions for her fellow arriving prisoners; she was forced to ask women who had been transported to Auschwitz with a group of unaccompanied children whether they wished to stay with the children upon arrival, and they replied that they did, as they had become the children's adoptive mothers; she describes her own arrival procedure at Auschwitz, including the treatment of pregnant woman, and the Nazis' desire to identify women who could dance and sing to provide entertainment for the soldiers working at the camp; she explains that about 500 people of her transport of 1,500 actually entered the camp alive, while the remaining 1,000 were gassed upon arrival

14:41 Mrs. Klebinder explains her work in Auschwitz; she was forced to organize the clothing and belongings taken from the members of each new arriving transport, which were collected for German citizens; she describes an episode in which a Hungarian woman working with her saw her mother and children entering the gas chamber from the other side of a barbed wire fence, and begged an SS to send her with them

14:44 The witness was sent from Auschwitz with 500 other women to a camp in Germany in November 1944, where she worked in a factory manufacturing car parts; in February 1945, she witnessed a fellow forced laborer give birth to a child; a female SS overseer took the newborn from her, killed it, put its body in a shoebox, and threw it in the river that ran behind the factory

14:47 President Cerdini questions the witness; he asks how she knew that the children on her transport were in fact the children taken in the Izieu raid; she explains that she only made the connection after the war, when she learned that the children of Izieu were deported from Drancy the same day as she was (April 13, 1944)

14:49 Prosecutor Ianucci asks whether the witness was handed a Polish bank note in a Nazi attempt to lull deportees into a false sense of security to mitigate revolt; he asks whether she witnessed the killing of Roma people, and she replies that she saw over 3,000 Roma people arrive at the camp and be sent directly to the gas chambers in one night

14:54 President Cerdini calls the next witness, Mrs. Paulette Roche née Palarès, to the stand; the witness presents herself to the court and is sworn in; the witness worked as a camp counselor at the Izieu camp during the summer of 1943, when she was 16 years old; she took care of the youngest boys and girls staying there; she describes how challenging it was to get these traumatized young children to sleep at night; she explains that the majority of the children had parents who had been deported; she took photographs of many of the children she took care of, which she saved after the war and gave to Serge Klarsfeld to use in his research of deported children

15:00 Prosecutor Libman asks Mrs. Roche to authenticate photos of children from Izieu, which were published in a book written by Prosecutor Klarsfeld

15:01 President Cerdini calls the next witness, Mr. Adolphe Waysenson, to the stand 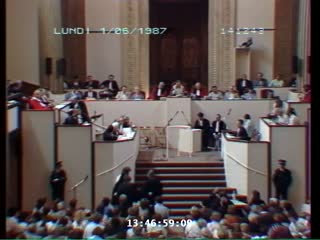