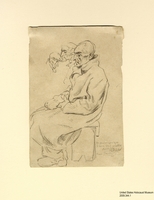 Drawing created by Boris Taslitzky in 1945 while he was a prisoner in Buchenwald concentration camp in Germany. It depicts a man in an overcoat, sitting on a bench. It was personally inscribed to a close friend in Paris after the war. Taslitzky joined the French military in August 1939 and served with the 101st Infantry Battalion. He was captured by the Germans in June 1940, but escaped and worked for the Resistance until recaptured in November 1941. He was sentenced to prison by a military tribunal for creating Communist propaganda. In 1944, he was deported to Buchenwald. Taslitzky recorded scenes of camp life and several people helped supply him with paper, pencils, and watercolors. Buchenwald was liberated in April 1945. Taslitzky returned to Paris with about 100 drawings and four watercolors which were published in 1946. Throughout his postwar career, he continued to make paintings about the camps and his wartime experiences.

Biography
Boris Taslitzky was born in Paris, France, on September 30, 1911, to Russian Jewish refugees. His father was an engineering student who fled Ekaterinaslav due to his activities during the 1905 revolution. His mother left when she was fourteen because she took part in a demonstration in 1905. She worked as an apprentice furrier and met Boris's father soon after her arrival. Due to a clerical error, Boris was baptized as Catholic. When he was four years old, his father was killed in combat in World War I (1914-1918). His mother worked as a seamstress to support them. She later remarried a mathematician. When he was four years old, his father was killed in combat in World War I. At the age of 17, he began his studies at the Ecole des Beaux-Arts and studied with sculptor Jacques Lipschitz and tapestry designer Jean Lurcat. He left school to take a job at the Maison de la Culture. In 1933, he joined the Association of Revolutionary Writer and Artists and two years later, became a member of the Communist Party. In 1936, he created paintings to promote support for the left-wing Popular Front in the elections. The next year, he provided the illustrations for the first edition of the French Communist Party newspaper, Ce Soir,
Taslitzky had competed his mandatory military service in 1931. But in August 1939, he was remobilized and assigned to the 101st Infantry Battalion at Meaux. Germany invaded France in May 1940. Boris was captured by the Germans at Gondreville in June 1940. He escaped during transfer to Melun and joined the Resistance, but was recaptured in November 1941. He was sentenced to two years in prison by a military tribunal for creating drawings for use in Communist propaganda. He spent seventeen months in a civilian jail in Royan, then was transferred to the French military prison in Bauzac (sp?), then St. Sulpice-la-Pointe near Toulouse. While there, he painted frescoes on the walls of seven cells, as well as the chapel.
His mother was arrested during the Vel d'Hiv roundup in Paris on July 17, 1942. She was deported by the Germans to Auschwitz concentration camp and died during transport. In July 1944, along with 662 other prisoners, he was deported to Buchenwald concentration camp in Germany. He was assigned to Barracks 34 with other French prisoners. Boris covertly sketched portraits and scenes from prison life, using any scraps of paper he could find. Even though his activity endangered everyone in the barracks, other prisoners helped supply him with paper, pencils, and watercolors, sometimes stolen from the SS. He was determined to bear witness by showing reality as it was happening in the daily life of the camp. Prisoners were forced to work twelve hours a day and several extra hours when it rained or snowed. There was a clandestine prisoner organization in the camp that sometimes told Boris to draw specific images. One day, his box of art supplies that he had brought to the camp was returned to him. Boris distributed his art to others who would help keep it from discovery by the SS camp guards.
Buchenwald was liberated on April 11, 1945, by US troops. Boris returned to Paris with about 100 drawings and four watercolors. In 1946, the writer Louis Aragon published them in an album entitled 111 dessins faits à Buchenwald 1944-1945 [111 drawings made in Buchenwald]. They showed in realistic detail the inhumane conditions under which the prisoners were forced to live. He also began painting pictures based on his experiences immediately after his return to France in 1945, including a huge fresco depicting the Small Camp at Buchenwald. Boris was a controversial figure in postwar French life because of his leftwing politics, antiwar protests, and his criticism of the collaboration of the French government in Vichy with the Germans. In addition to his work as a painter, Boris worked as a conservator at the Musee de la Resistance a Champigny. In 1997, he was appointed a chevalier of the Legion of Honor. Taslitzky died on December 9, 2005, age 94.