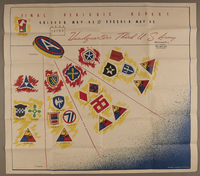 Third Army Final Report poster received by 23 year old James Romberger, an American soldier, illustrating the combat location of the Corps and Divisions of the US Third Army in Germany in May 1945. Romberger was a military policeman with the Third Army under General George S. Patton. He was deployed in Europe by July 1944 and fought with his unit through France and Germany. He participated in the liberation of Buchenwald concentration camp on April 11, 1945.

Biography
James A. Romberger was born on February 7, 1922, in Eldred Township, Pennsylvania, to Walter and Maud Romberger. He had two sisters and four brothers. He attended Penn State University and studied agriculture. On September 18, 1942, James enlisted in the United States Army Reserves as a private in the Philippine Scouts. James saw action on D-Day, June 6, 1944, in France and served as a military policeman and criminal investigator with the US Third Army under General George S. Patton. The unit fought its way through France and into Germany.
James participated in the liberation of Buchenwald concentration camp on April 11, 1945. He was present from the time the German guards fled the camp until the US Army arrived and began to feed the prisoners. When the camp was first liberated, James and the other soldiers were forbidden to write home about what they saw. After General Eisenhower saw the camp, they were encouraged to document what they saw so that it could never be denied. A Dutch former prisoner of war gave him a tour of the camp. James described the experience in an April 29 letter to his family: “The odor was so bad that I had to smoke and inhale the smoke to keep from getting sick . . . The people I saw there were walking skeletons, many of them too weak to get up from their ‘beds.’” The floors were covered with vomit and the toilets were holes in the floor at the end of each barracks. He viewed the crematorium where there were partially burned bodies and bodies stacked four feet high. In the basement, he saw the room where prisoners were interrogated and killed; the walls had several coats of white wash yet that failed to cover up the blood.
After James was released from the Army, he returned to Pennsylvania and completed his college degree. He married Margaret Paul in August 1947 and had three children. He pursued a career in education, teaching for fifteen years at Cressona High School. He then earned as master's degree at Bucknell and became principal of Blue Mountain High School in Hershey for nearly twenty-five years. James never spoke about his wartime experiences for many years after the war. In later years, he did speak with school and community groups in order to preserve the history of what he saw so that it would never happen again. He was honored for years of dedicated charity work in 2008. James, age 91, died on October 16, 2013.

Legal Status
Permanent Collection
Provenance
The US Army report poster was donated to the United States Holocaust Memorial Museum in 2010 by James A. Romberger.
Funding Note
The cataloging of this artifact has been supported by a grant from the Conference on Jewish Material Claims Against Germany.
Primary Number
8268

Also in James A. Romberger collection

The collection consists of artifacts, documents, and a photograph relating to the experiences of James A. Romberger, a soldier in the United States Third Army in France and Germany in World War II, during which he participated in the liberation of Buchenwald concentration camp.

Die Deutsche Arbeitsfront [German Labor Front] red fringed sash acquired by 23 year old James Romberger, an American soldier, in Germany in spring 1945. The sash would be displayed hanging vertically over a pole so that both topside ends were visible. After the government abolished trade unions in 1933, the DAF was the only trade union allowed in Nazi Germany. Romberger was a military policeman with the Third Army under General George S. Patton. He was deployed in Europe by July 1944 and fought with his unit through France and Germany. He participated in the liberation of Buchenwald concentration camp on April 11, 1945.

Deutscher Volkssturm Wehrmacht [German People’s Militia] brassard taken by 23 year old James Romberger, an American soldier, from a German officer in 1945. This militia was not part of the army, but was organized late in the war by the Nazi Party per Hitler's orders of September 25, 1944. It was composed of males who had been exempted from home guard and military service because of age or health. Romberger was a military policeman with the Third Army under General George S. Patton. He was deployed in Europe by July 1944 and fought with his unit through France and Germany. He participated in the liberation of Buchenwald concentration camp on April 11, 1945.

Consists of material related to James Romberger's experiences as a member of the United States Third Army and as a liberator of Buchenwald. Includes a wartime photograph of Mr. Romberger, a map of Paris issued to the occupied forces, a booklet of notable buildings in Brussels, a menu for a July 4, 1944 commemoration, a Christmas 1944 menu, a Christmas 1944 prayer card issued to the Third Army by General George Patton, the original and a transcript of a letter Romberger wrote describing his impressions of the Buchenwald concentration camp, and a letter written to his wife after the end of the war. Also includes photographic negatives which Romberger sent home in October 1944.