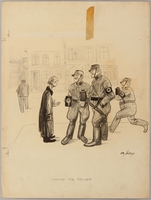 Physical Description
Image of three Nazi soldiers, all holding round cans with swastikas; they are approached by a thin, pitiful looking fellow who holds his hand out in a gesture of asking for something; all four stand in front of buildings, one which has a sign that says "Butter" over the doorway.
Dimensions
overall: Height: 19.880 inches (50.495 cm) | Width: 15.000 inches (38.1 cm)
Materials
overall : paper, charcoal, ink, graphite
Signature
lower right corner of image, in ink, "Wm. Sharp"
Inscription
in pencil, caption "Looking for Relief" (appears to be written in hand other than artist's)
Contributor
Artist: William Sharp