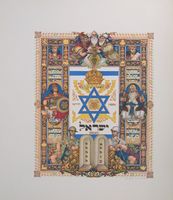 Postwar lithograph by artist Arthur Szyk depicting a visual representation of the history of Israel. Arthur Szyk was a Polish-Jewish artist who fled Nazi-controlled Europe for London in 1937, and eventually immigrated to the United States in 1940. He started his career in book illustration and was considered one of the greatest modern practitioners of the art of illumination. His widely published caricatures made him one of the most famous political satirists during World War II. In 1945, he was commissioned by Canadian philatelist Kasimir Bileski to create illustrations for a series of stamps depicting the Visual History of Nations (United Nations). Szyk designed the stamp album frontispieces for nine countries, including one for Israel, but died in 1951 before the project could be completed. This frontispiece for Israel intricately weaves together biblical and historical figures, symbols, and Hebrew script to visually tell the story of 4,000 years of Jewish history including the organization of the 12 tribes of Israel, The Exodus, the Bar-Kokhba Revolt, the prophecies of Ezekiel, and the creation of the State of Israel.

Physical Description
Color lithograph printed on off-white paper with a white, rectangular central panel containing a blue Star of David with grapes in the center, a gold crown and menorah design above, and Hebrew characters and printed text below. At the top center, above the panel, are 3 elaborately dressed figures (Hur, Moses, Aaron) huddled together. Moses, in the center, has his arms around the shoulders of the others, his hands and index fingers pointing outward. To their right and left, inset into squares, are portraits of King Solomon and King David, both depicted with dark hair and golden crowns. At the bottom center are the Ten Commandment tablets flanked by gold lions with an Israeli soldier on the left holding a rifle and a pioneer man on the right holding a shovel. On the right and left center are portraits of men inset in blue medallions: Ezekiel is depicted on the right with a long white beard holding a staff, while Bar-Kokhba is depicted on the left holding a sword and shield. Above and below both medallions are white Stars of David superimposed with blue Hebrew characters and set into floral panels. The figures are divided by four elaborate gold columns with a leaf design, two on each side of the central white panel. Throughout the image are twelve gold symbols representing the twelve tribes of Israel. The image is bordered by an intricate floral motif interspersed with yellow Stars of David. The artist’s signature is printed in pink ink below the image on the right. The left margin of the print is wider than the right. There are five lines of printed text on the back.
Dimensions
overall: Height: 11.500 inches (29.21 cm) | Width: 9.875 inches (25.083 cm)
Materials
overall : paper, ink
Markings
Back, lower left, printed, black ink: Title Page for the Plate of Israel / Artist-Arthur Szyk, New York / Published by K. Bileski, Station B, Winnipeg, Canada / Lithographed in the U.S.A. by Herman Jaffe, Printer, New York, U.S.A. / Copyright 1949.
Signature
Front, bottom right, printed, pink ink: ARTHUR SZYK, NEW CANAAN, 1948
Contributor
Artist: Arthur Szyk
Printer: Herman Jaffe & D’Arcy Lithographic Company
Publisher: Kasimir Bileski

Legal Status
Permanent Collection
Provenance
The Arthur Szyk lithograph was donated to the United States Holocaust Memorial Museum in 2003 by William Hallam Webber.
Funding Note
The cataloging of this artifact has been supported by a grant from the Conference on Jewish Material Claims Against Germany.