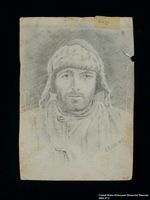 Physical Description
Reproduction of a realistic, pencil portrait drawing on rectangular, offwhite paper of a man from the midchest up, facing forward and gazing straight ahead with a weary expression. He has slight bags under his eyes, fine facial lines, pressed lips, and a beard. He wears an ushanka with the ears unfolded and a telogreika with a ribbed design, low collar, and two front buttons. There are diagonal strokes around his head that lighten near the edges. On the upper right is yellowed tape with a handwritten word and a number, and there are 10 diagonal lines of handwritten Russian text and a signature on the back. The edges are slightly uneven.
Dimensions
overall: Height: 5.625 inches (14.287 cm) | Width: 3.875 inches (9.843 cm)
Materials
overall : paper, ink, masking tape, graphite
Inscription
front, top right edge, on tape, handwritten, blue ink : Kopy
front, upper right, underlined, handwritten, blue ink : 10
front, lower right, pencil : 1806.43
reverse, upper left, cursive, blue ink : Russian text [[illegible] 1942 / The day of departure from the camp and surrounding the enemy's camp. Our route: Chernigov, Poltava, Sumy and Kursk oblasts]
reverse, lower right, cursive, blue ink : Russian text [For good memory - my dear parents from their son Iosif / July 30, 1943]
reverse, near center right edge, cursive, blue ink : Vinnitsky
Contributor
Subject: Joseph Vinnitsky

Biography
Joseph Vinnitsky was born on April 20, 1913, to Jewish parents in Lipovets, USSR (Ukraine). He later lived in Kiev. During World War II (1939-1945), he served in the Soviet Army. In June 1941, Germany violated the German-Soviet Pact and invaded the Soviet Union. Joseph was imprisoned in a German prisoner of war (POW) camp in the Soviet Union. In 1942, he escaped and traveled to Chernigov, Poltava, Sumy, and Kursk oblasts. He rejoined the army and was stationed in January 1944 in a small village, where he encountered twenty Jewish families, about sixty people, living in hiding. The Germans entered the village looking for Jews and anyone harboring Jews. As they went door to door, a non-Jewish bookkeeper, P.S. Zirchenko, convinced them that there were no Jews in the village. The Germans soon departed. Shortly after, Joseph wrote to Ilya Ehrenburg, a Soviet journalist and novelist, who said he would include the experience in his Black Book of Russian Jewry. Joseph was stationed in 1945 in Sofia, Bulgaria. On May 7, Germany surrendered to the Western Allies, and on May 9 to the Soviets. During his service, Joseph attained the rank of Lieutenant.

Joseph married Rozalia Smoilowsky, born on October 17, 1918, in Ukraine, and the couple had two children. Many of Joseph and Rozalia’s family members were killed during the Holocaust. In 1979, Joseph and his family settled in New Haven, Connecticut, with assistance from the Jewish Federation of Greater New Haven. He became a naturalized citizen on April 12, 1985.

Legal Status
Permanent Collection
Provenance
The portrait drawing reproduction was donated to the United States Holocaust Memorial Museum in 2004 by Joseph Vinnitsky.
Funding Note
The cataloging of this artifact has been supported by a grant from the Conference on Jewish Material Claims Against Germany.

The collection consists of a reproduced drawing, documents, and a photograph relating to the experiences of Joseph Vinnitsky while serving in the Soviet Army during World War II.