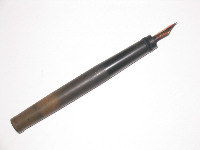 Waterman-style safety fountain pen used by Edward Vebell, 24, to create courtroom sketches at the 1945 Trial of Major German War Criminals before the International Military Tribunal in Nuremberg, Germany. The sketches were published in the U.S. Army newspaper Stars and Stripes on December 9, 1945. A young commercial artist when he was drafted for the US Army, Vebell was the first staff illustrator for Stars and Stripes. His assignments included combat zones in Italy and France. For the Nuremberg trial assignment, he sat in the press gallery for 3 days and used field glasses to “bore into the faces” of the defendants, including Rudolf Hess and Hermann Goering, as he sketched. He did 90% of his drawing in the courtroom, seeking to bring intimacy to the historical proceedings. See 2003.435 for the nine drawings in the USHMM collection.

Physical Description
Well used, brown, hard rubber fountain pen with a 14K gold open fine point nib with a slit, breather hole. There is a one inch, black, threaded band at the top of the barrel for the screw-on cap, which is missing. The black plastic feed protrudes from here and fits within the nib. The pen fills by withdrawing the nib into the body by turning the flat bottomed end knob counterclockwise, then dripping ink into the front, followed by either capping the pen or extending the nib again to plug the reserve. The pen held enough ink to write or draw several dozen pages.
Dimensions
overall: Height: 4.875 inches (12.383 cm) | Diameter: 0.375 inches (0.953 cm)
Materials
overall : rubber, plastic, gold
Markings
on nib, engraved : WARRANTED / 14K / U.S.A.
on barrel, engraved : MADE IN FRANCE
Contributor
Subject: Edward Vebell

Biography
Edward (Ed) Joseph Vebell was born on May 25, 1921, in Chicago, Illinois, to Joseph and Helen Rubeckas Vebell. His father was born in 1888 in Pasvitinys, Lithuania. His mother was born in 1897, also so Lithuania. He had two sisters. Edward’s talent for drawing was recognized at an early age and, as a teenager, he attended the Harrison Art School. By the age of eighteen, he was working as an illustrator. On graduating high school, he won scholarships to 3 art schools in Chicago, and he later studied in Paris, France. In December 1941, when the United States entered World War II, Edward was working as a commercial artist in Chicago, creating illustrations for the catalog companies Sears and Montgomery Ward.

Edward was drafted into the US Army on October 24, 1942. He was deployed to Casablanca in North Africa with the 904 Camouflage Engineers, where he painted desert camouflage on Army equipment. In February 1943, the Army newspaper Stars and Stripes opened an office in Algiers. Edward was transferred there as the first staff illustrator. A few months later, the paper added Stan Meltzoff and Bill Mauldin. Edward worked as a combat artist and correspondent and beginning in late 1943/1944, also did illustrations for Yank, a magazine published by and for enlisted men. Edward learned to capture the battles in ink and pencil on the job: “To be a good combat artist, you have to stand up and face in the enemy's direction. You can't do that for very long, or you'll be dead.” He was influenced by photography, but felt that drawing allowed him to impart a searching personal quality to the image. His assignments included frontline sketching in Italy for six months during the spring 1944 Monte Cassino campaign, with French troops in the Alps, and with French resistance fighters in the Pyrenees. He was sketching Russian forces a few days after the May 2, 1945, fall of Berlin. Germany surrendered on May 7. Edward then was based in Paris where he began doing freelance work for several French publications.

On December 17, 1942, the leaders of the United States, Great Britain, and the Soviet Union had issued a joint declaration resolving to prosecute those responsible for the mass murder of European Jewry. Six and a half months after the war ended, the Trial of German Major War Criminals before the International Military tribunal opened in Nuremberg on November 20, 1945. Edward was assigned by Stars and Stripes to create courtroom sketches at the trial. For three days, he sat in the press gallery and used binoculars to focus on the faces of the defendants, including Rudolf Hess and Hermann Goering. The field glasses reversed the images, which was an annoyance, but bearable for the detail they provided. Edward sketched directly in fountain pen, from right to left, using a moistened thumb to create tonal values. He did 90% of his drawing in the courtroom, seeking to bring intimacy to the historical proceedings. Ten drawing were published in the December 9, 1945, European issue of Stars and Stripes, his last assignment.
After his discharge from the military in late 1945, Edward established a commercial studio in Paris. He returned to the US in 1947 and continued his career as a commercial artist. His illustrations have appeared in books and periodicals, and clients have included Reader’s Digest, Life, Time, and Sports Illustrated. Edward also created murals for the National Park Service and sixteen stamps for the US Postal Service. He was especially sought after for his historical works, with their knowledgeable attention to detail and accuracy. Vebell also had an exceptional competitive fencing career. He was an international champion and member of the 1952 US Olympic team, and was named to the US Fencing Hall of Fame in 2014. He was married for nearly sixty years to Elsa Cerra (1926-2004), with whom he settled in Westport, Ct., and had three daughters.