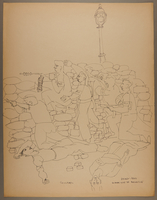 Ink line drawing created by 13 year old Francois Szulman about 1944 depicting a scene he witnessed in his Parisian neighborhood on the eve of liberation, August 23, 1944. It is an image of an armed group of young men with FTP armbands for the Communist resistance movement firing a machine gun and rifles over a large sandbag barricade. Belleville was a working class suburb with a large Jewish and immigrant population. During the occupation of France by Nazi Germany that began in June 1940, the Germans sought to remove all Jews from Paris. Francois and his mother were arrested in July 1942 during the Vel d'Hiv roundups, but released because his father was a prisoner of war. They went into hiding, but his mother died in December 1943 because she could not get medical care. Paris was liberated by US troops on August 25, 1944.

Physical Description
Black ink line drawing on white paper depicting a group of armed men with FTP armbands fighting from behind a sandbag barricade. The vigorous drawing fills the page. In the foreground, 2 young men lie on their backs on the ground: on the left is a muscular man, with his eyes and mouth open; on the right, a man with closed eyes, left arm across his chest. A man lies, head downward, face hidden, near the bottom of the barricade and appears dead. In the center, a man is seated within the sandbags, firing a machine gun. Another man stands close behind, right arm raised, left arm preparing to throw a circular object. Near him kneels a man, rifle slumped, possibly for reloading. A man with his arm in a sling holds a rifle on the far right. The top of a lamp post is visible in the background. The artist's name and French text are on the lower front.
Dimensions
overall: Height: 25.500 inches (64.77 cm) | Width: 19.750 inches (50.165 cm)
Materials
overall : paper, ink
Signature
front, lower center, black ink : SZULMAN
Inscription
front, lower right corner, black ink : 23 AOÛT 1944 / LA BARRICADE DE BELLEVILLE
Contributor
Artist: Francois Szulman
Subject: Francois Szulman

Biography
Francois Szulman was born on June 5, 1931, in Paris and raised in the Belleville district. He was the only son of working parents who had immigrated from Poland. His father was a knitting worker, and then a garment worker. After Germany invaded Poland on September 1, 1939, France declared war on Germany. Szulman’s father volunteered for the French army and was captured and made a prisoner of war.

In May 1940, Germany invaded France and, after the June surrender, Paris became the seat of the German military occupation government. Anti-Jewish measures were introduced, including the confiscation of businesses and mass arrests and deportations. On July 16, 1942, Szulman and his mother were arrested during the Vel D’Hiv round-ups as the Germans began to rid Paris of all its Jews. Because his father was a prisoner of war, they soon were released. In order to avoid persecution or another arrest, Szulman and his mother went into hiding. Szulman’s mother died on December 24, 1943, due to a lack of medical care. She had become ill, but could not be admitted to a hospital.

Paris was liberated by American troops on August 24, 1944. Szulman was able to return to school, and developed his gift for drawing. In 1946, Szulman was accepted at the Paris College of Applied Arts. He later had to abandon his studies and go to work in a knitting factory. He became a garment cutter, but continued painting at night. In 1950, he married and had two children. He had his first exhibition in 1967 at Gallery Regis Langlois. It was a success and eventually Szulman was able to devote himself exclusively to painting.

Legal Status
Permanent Collection
Provenance
The drawing was acquired by the United States Holocaust Memorial Museum in 2004.
Funding Note
The cataloging of this artifact has been supported by a grant from the Conference on Jewish Material Claims Against Germany.

Book about the work of the artist Francois Szulman published in France in 1988. Francois live with hs mother in the working class arrondisement of Belleville in Paris. Germany invaded France in May 1940, and in June, Fracee capitulated. By 1942, theGermans sought to remove all Jews from Paris. Francois, age 11, and his mother were arrested in July that year during the Vel d'Hiv roundups, but released because his father, a French soldier, was a prisoner of war. They went into hiding, but his mother died in December 1943 because she could not get medical care. Paris was liberated by US troops on August 25, 1944. Francois was able to return to school, and develop his gift for drawing.