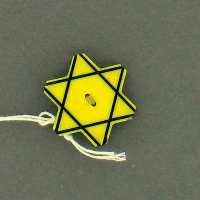 Star of David button made of Bakelite that Linka Nathan, or her mother, Rebecca, were required to wear to identify them as Jews in Sliven and Sofia, Bulgaria, from 1942-1944. Her father, Jacques was issued a circular, yellow button to identify him as a veteran of World War I. Beginning in July 1940, the Bulgarian government initiated anti-Semitic legislation that prohibited Jews from holding certain jobs, living in certain areas, or marrying non-Jews. Linka's father was one of the attorneys selected to interpret the new legislation to members of the Jewish community in Sofia.

Physical Description
Yellow Bakelite button in the shape of a 6-pointed Star of David incised on the front with black lines that form the outline of a Star of David. The end points of each arm of the star have been cut straight. There are 2 holes in the center with black thread through the holes.
Dimensions
overall: Height: 1.250 inches (3.175 cm) | Width: 1.250 inches (3.175 cm) | Depth: 0.125 inches (0.318 cm)
Materials
overall : bakelite (tm), thread, paint
Contributor
Subject: Linka Behar

Biography
Linka Nathan was born on February 10, 1925, in Bulgaria. Her father, Jacques, was a veteran of World War I, 1914-1918, and a lawyer. After Bulgaria began instituting anti-Semitic legislation in July 1940, her father was chosen as one of two attorneys to interpret the anti-Jewish laws for the Jewish community in Sofia. The family were residents of Sofia except for the period from 1942 until September 1944, when they lived in Sliven. Linka was married to Berto Behar, who was born on November 8, 1923. He was imprisoned in three forced labor camps, Burgase and twoothers, during World War II.

Legal Status
Permanent Collection
Provenance
The Star of David button was donated to the United States Holocaust Memorial Museum in 2007 by Berto and Linka Behar.