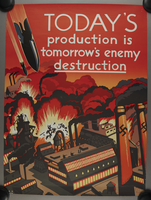 Biography
Chester Raymond Miller (1898-1968), known professionally as C.R. Miller and Chet Miller, was born in Howes Cave, New York. He was a self-trained artist, and worked as Art Director for Kelly-Read & Company. In this role, Miller designed posters for the Think American Institute (TAI) series of posters that was launched in 1939, and continued until the series was ended in approximately 1960-1961.

The United States Office of War Information (OWI) was created on June 13, 1942, to centralize and control the content and production of government information and propaganda about the war. It coordinated the release of war news for domestic use, and using posters along with radio broadcasts, worked to promote patriotism, warn about foreign spies, and recruit women into war work. The office also established an overseas branch, which launched a large-scale information and propaganda campaign abroad. The government appealed to the public through popular culture and more than a quarter of a billion dollars' worth of advertising was donated during the first three years of the National Defense Savings Program. Victory in Europe was declared on May 8, 1945, and in Japan on September 2, 1945. The OWI ceased operation in September.

Legal Status
Permanent Collection
Provenance
The poster was acquired by the United States Holocaust Memorial Museum in 2015.
Funding Note
The acquisition of this artifact was made possible by the Crown Family.

The collection consists of thirteen posters relating to the war effort in the United States before and during World War II.

US homefront poster of a man sleeping on the job

US war poster of a Nazi boot crushing a church

US homefront poster of a burning plane as it crashes

US homefront poster showing people, backs to the wall, bring threatened with violence

US homefront poster with an image of Thomas Edison

Poster created by Ben Shahn for the US Office of War Information as a response to the Nazi-led annihilation and destruction of communities throughout the Czech Republic, including Lidice. It also protests the retaliatory measures taken for the attempted assassination by Czech resistance members of Reinhard Heydrich, director of the Protectorate of Bohemia and Moravia, under the Nazi occupation.

US homefront poster with an image of a welder

Security of War Information Campaign poster warning people to guard what they say in public because it could lead to the death of military personnel. The poster was designed by Stevan Dohanos, an illustrator and painter known for his “American Realist” style and depictions of everyday life. The poster was part of the Security of War Information Campaign, also known as the “hush-hush campaign.” This cooperative project was undertaken by the Office of War Information (OWI) with the oversight of a Security Committee, which included representatives from the OWI, the Army, Navy, FBI, and other agencies. The campaign focused on educating the public about the need for discretion in their communication to prevent information from being leaked to the enemy. The need to manage information about the war on the home front led to the establishment of the OWI in June 1942. This office controlled the design and distribution of war information to the American public in print, radio, and film media, and commissioned work from leading artists. The American campaign drew on themes from the British “careless talk series” of 1940. It highlighted the many ways that careless talk could leak sensitive information that enemies would use to kill soldiers, sink ships, and undermine the war effort.

Poster showing a man being branded with a swastika

View All 13 Items in the Collection