Jewish people in Lublin and Krasnik, 1940

Lublin, late summer 1940, man rides bike down the street. People mill about on the sidewalk. A Polish officer crosses the street. German soldiers march in twos down the street. More men in uniform walking along the sidewalk, as well as women and children. Large trees line the sidewalk. Another group of soldiers walking together. A woman walks across the street but halts as a line of men march on in her path. They make a right and turn down another street. Swastika flag on building, mostly obscured by trees. Horse-drawn carriage. Buildings bombed out along the street. The Cathedral of Lublin (?). Carriages in the FG. Entrance to church in Krasnik. Man walks away from the building and dons a hat. Crowd of men leave entrance and put on hats as they walk.

02:30 Intertitle: “Die Piastenburg.” HA panning view of the city and the Lublin Castle.

02:52 Intertitle: “Das Krakauer Tor, der Hauptzugang zum Ghetto.” [Krakow Gate, main entrance to the Lublin ghetto, established in March 1941 - this slate was created by the camera operator and it is unclear why he used the term, "ghetto"] A town square. German soldiers barely visible in FG. Large building: “ZARZAD MIEJSKI” Buildings to the right and ghetto wall with large gateway. Tracks lead through the entryway. 03:32 Man wearing armband crosses in front of camera. Sign identifying a Jewish business reads, “Judisches Geschaft Przedsieblorstwe Zydowskie.” Another in the window next door reads, “FUR WEHRMACHTSANGEHORIGE VERBOTEN” [Forbidden for German Army personnel] Jews walk along the streets of Lublin. Buildings in ruins, piles of rubble. Jewish people wearing armbands walk through the streets. Some look at the camera; 04:17 two men look directly into camera, then religious Jew looks into camera, probably at the direction of the cameraman. A man in a horse-drawn cart. Women with armbands, more than one with the Star of David fully visible. More men, women, and children walk about the ghetto. Sign on the corner reads, “FELCZER.” People lightly push a man towards the camera as he walks by. Many glance at the camera.

06:12 Intertitle: “Wasserverkauf” [selling water] A woman refills her water pail at a spigot. A child cups the water in her hands. A man refills his bucket. Others line up to do the same. An individual can be seen watching from behind a window in the building from which the spigot protrudes. The customers place money in a slot outside the window. (This is perhaps the only know visual evidence of this activity as the site was destroyed during the war.)

06:51 Intertitle: “Krasnik.” People walk and stand on the sidewalk in Krasnik, Poland, near Lublin. A horsedrawn wagon. Horses, attached to wagons in stables. People stand near baskets of potatoes? Children run around. Men and women wearing armbands. The street. "Ende.” 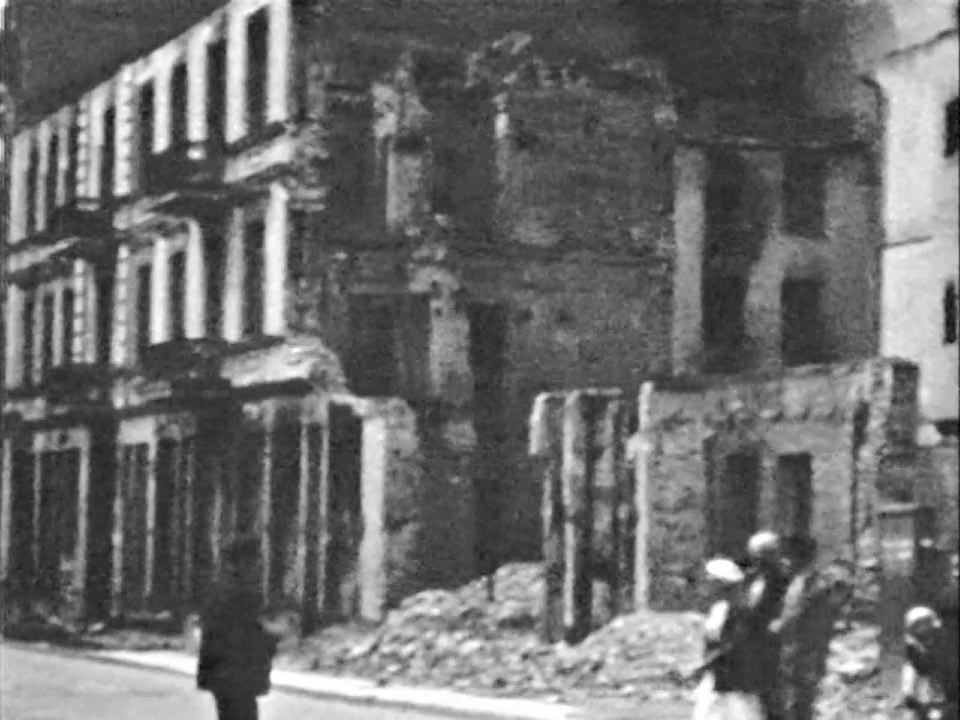 Legal Status
In process
Film Provenance
An anonymous person donated a digital file of this nine minute section of private 8mm films made by a German who was working as a salesman in Poland in the early 1940s to the United States Holocaust Memorial Musem in December 2016.
Note
The introductory slate including restrictions on use and the contemporary maps of Lublin and Krasnik were added by the donor and not original to the 8mm film footage.

The film was analyzed in January 2017 by Tomasz Kranz and Krzysztof Banach from the Majdanek Museum; Adam Kopciowski of Lublin University; and Jacek Nowakowski and Alina Skibinska from USHMM. They noted that some of the scenes depicted in this film footage are very rare and only known from post war testimonies - for example, purchasing of water in the "ghetto" (pre-Nazi ghetto Jewish district) and ruins of some buildings that later disappeared. They dated the footage from late spring to late summer 1940. Lublin was heavily bombarded during the siege in 1939, and ruins of many buildings were cleared by late summer of 1940; in the main part of the old town, the Germans built a narrow range rail system to help remove the rubble and that rail is visible on the shots of Grodzka street; the rails were removed by late 1940. Also, sometime in early 1941, the Germans confiscated all metal architectural elements, e.g railings on balconies and stairs. These are visible in the footage, so it was likely filmed sometime in 1940. The ghetto was established in Lublin in March 1941 and here we can see Jews walking in all parts of town wearing the prescribed armbands.
Copied From
8mm b/w
Film Source
Anonymous

Copyright
Copyright. Anonymous
Conditions on Use
The family does not want this footage to be used in public, neither for academic nor personal presentations and/or publications, nor for commercial presentations and/or publication of any kind, nor for USHMM use. It is not to be sold or issued for free to anybody intending to use it for anything else than their own family history research.
Record last modified: 2020-08-04 09:20:22
This page: https://collections.ushmm.org/search/catalog/irn556014